‘No hard feelings’ for Thomas Dooley after Azkals sacking 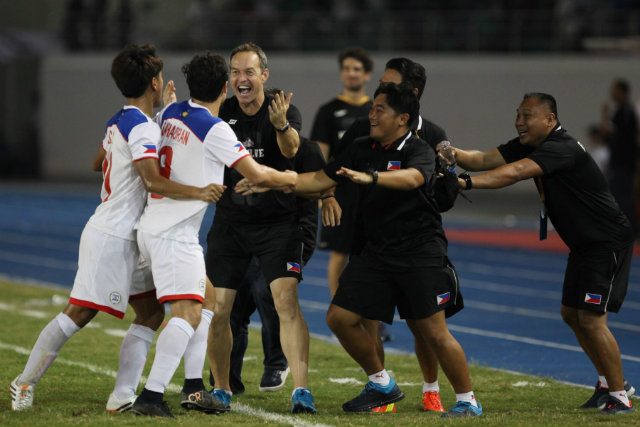 MANILA, Philippines – Thomas Dooley said he has “no hard feelings” even after the Philippine Football Federation (PFF) decided not to extend his contract as head coach for the Philippine Azkals.

Dooley took to Facebook to air his side after the Azkals announced that he will be replaced by Englishman Terry Butcher.

“I have no hard feelings about the decision the PFF made. I don’t understand but I respect the decision,” Dooley wrote on Facebook.

“I’m proud and humbled to get the chance to represent this beautiful country, his terrific people and leading those fantastic players!”

Since Dooley took over the coaching reins for the Azkals in 2014, the national team has risen through FIFA’s world rankings. From the 130th spot, the Nationals are now ranked 115th. (READ: Thomas Dooley: A retrospective)

It is also under Dooley’s tutelage that the Azkals clinched an Asian Cup berth for the first time in history. The Philippines nipped Tajikistan, 2-1, last March to advance to the Asian Cup, which will be held in 2019 in UAE.

Although Dooley did not part ways with the Azkals in the way that he probably wanted, he was not short of praises for the future of the Philippines in football.

“When the football community realizes that the Philippines have the genes of the Hispanics (Spain, Brazil, Argentina, etc.), their football future could be an Asian powerhouse. Maybe one day with the right program it will happen.” The former USA team captain added he hopes for the best for the Azkals in the Asian Cup.

“Good luck in the upcoming games and especially in the Asian Cup and thank you for the wonderful memories, which I will always carry with me.”

If Dooley wants to remain a part of the national squad, Azkals team manager Dan Palami said he could still serve as technical director of the Azkals.  – Rappler.com