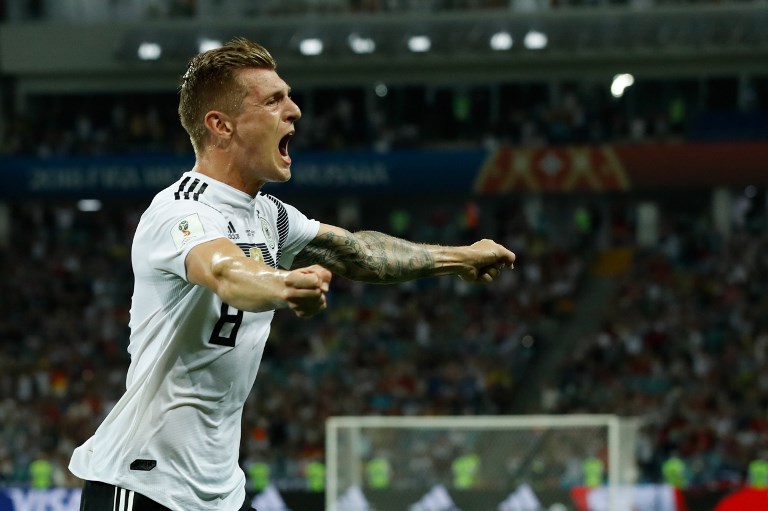 Germany’s late, late show keeps Joachim Loew’s  squad on course to be the first team to retain the title in 56 years but their fate is still not entirely in their own hands.

“We never lost hope. I think there was a bit of luck there with the goal scored in stoppage time, but it was a result of our belief in ourselves,” said Loew.

“Despite the adversity, the team kept their cool and turned it around.”

The defending champions were in desperate trouble when Ola Toivonen lifted the ball over Manuel Neuer to put the Swedes ahead in the first half in Sochi after Kroos gave the ball away.

Germany, looking far sharper than they did in their opening defeat against Mexico, piled forward and eventually earned their reward when Marco Reus reacted quickly to turn the ball in shortly after the interval.

When you bag a stoppage-time stunner at the #WorldCup @ToniKroos

Despite incessant pressure, Loew’s men could not find the goal they craved as time ticked away and Germany’s task was made more difficult when key defender Jerome Boateng was sent off in the 82nd minute for a second yellow card.

But Kroos had other ideas, stepping up in the 95th minute to curl a free-kick from the left edge of the penalty area into the top corner, beating the despairing dive of Robin Olsen, who had been outstanding in the Swedish goal.

“Of course, the first goal (by Sweden) was my fault. When you put in 400 passes in a game, then one or two won’t go where they should,” said Kroos.

“Now we have to recover and we don’t have much time before we have to beat (South) Korea, when we have to play convincingly.”

Germany – level with Sweden on 3 points, with Mexico on 6 points – must now beat South Korea in Kazan on Wednesday and hope the other result in Group F goes their way.

The defending champions put in a nervous display after a barrage of criticism following defeat to Mexico.

Kroos took a thinly-veiled dig at the German media and former players who had been sharply critical of the team over the last 6 days.

“We were criticised a lot, justifiably so in part, and a lot of people in Germany would have been pleased if we had gone out today,” said Kroos, who admitted there is still room for improvement.

“Overall, we once again had phases where we played really well and didn’t use our chances.”

Reus, whose goal sparked Germany’s fight back at the start of the second-half.

“Toni’s shot, what can you say about that?” said Reus.

“At this World Cup, a lot of goals have come at the end (of games) and today luck was on our side.

“We started well, but didn’t have that many clear chances.

“Sweden did well, were very compact and tight in defense.

“It’s hard to say why we made the error, Toni made the mistake, but smoothed things out and did everything right in the end.”

Germany forward Thomas Mueller said the holders were rewarded despite having their backs to the wall for most of the match.

“We put everything into it and were rewarded at the end,” beamed Mueller.

“True, we were a man down, but we tried, didn’t give up and said that we had to stay with it until the last second.

“Sometimes you get your reward.” – Rappler.com