Jun 26, 2018 12:40 AM PHT
Agence France-Presse
Facebook Twitter Copy URL
Copied
This is the first time Uruguay has won all 3 group games at a World Cup 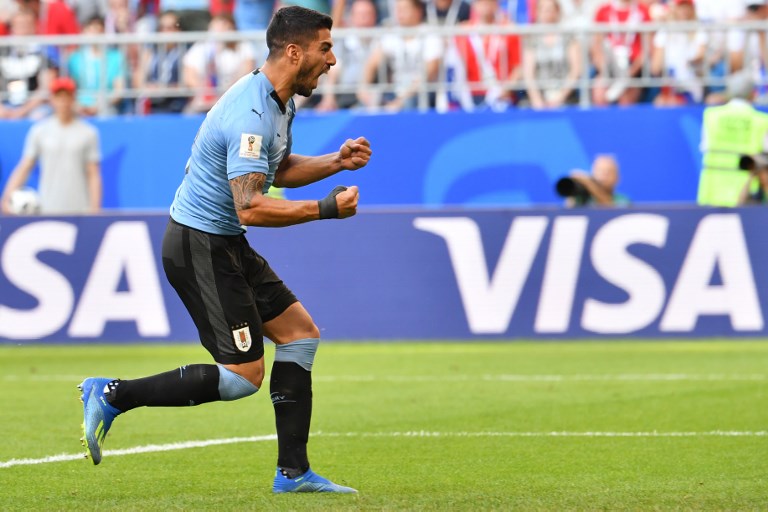 SAMARA, Russia – Luis Suarez helped fire Uruguay into the last 16 of the World Cup as Group A winners on Monday after opening the scoring in their 3-0 win over host nation Russia, who had a man sent off.

A pinpoint free-kick from the Barcelona star and an own goal from Denis Cheryshev put Uruguay 2-0 up inside 23 minutes in Samara before Edinson Cavani added a late 3rd in Samara.

Russia was reduced to 10 men after 36 minutes when right-back Igor Smolnikov was sent off for two yellow cards in a match which will be a reality check for a team that easily won its first two matches.

This is the first time Uruguay has won all 3 group games at a World Cup.

The South Americans will play their last-16 tie in Sochi this Saturday against the Group B runners-up, either Spain, Portugal, or Iran.

Russia, who had sealed their spot for the last 16 before the match, will have the consolation of a day’s extra rest and huge support at Moscow’s Luzhniki Stadium when they face the Group B winners on Sunday, July 1.

Uruguay stamped its authority early in the group decider.

When Russian midfielder Iury Gazinsky fouled Rodrigo Bentancur on the edge of the area, Suarez expertly placed the direct free-kick in the gap between the out-stretched glove of Russia’s goalkeeper and the post on 10 minutes.

Uruguay doubled their lead when Diego Laxalt’s shot took a wicked deflection off the leg of defender Cheryshev and flew past the despairing Akinfeev on 23 minutes.

It was heart-breaking for Cheryshev, who scored twice in the 5-0 trouncing of Saudi Arabia in the opening game.

To compound Russia’s problems, Smolnikov was sent off after scything down Laxalt just 8 minutes after his first booking.

Smolnikov, one of 3 changes from the team which enjoyed a 3-1 win over Egypt, was on the verge of tears as he trudged off with the home crowd stunned into near silence.

Despite the numerical disadvantage, Russia had opportunities to get back in the game as they kept battling.

With 20 minutes remaining, the video assistant referee turned down Russian appeals for a penalty after Artem Dzyuba appeared to be elbowed in the face by Diego Godin.

Moments later, a badly-hit clearance kick by Uruguay goalkeeper Fernando Muslera was snapped up by the Russians and Dzyuba fired just over the bar from 14 meters out.

Cavani sealed the win on 90 minutes by tapping home the rebound, after Akinfeev had parried Godin’s header. – Rappler.com