Reus on a mission as Germany seeks to complete escape act

Jun 26, 2018 3:04 PM PHT
Agence France-Presse
Facebook Twitter Copy URL
Copied
Germany will only go through to the last 16 if it wins by two or more clear goals against South Korea 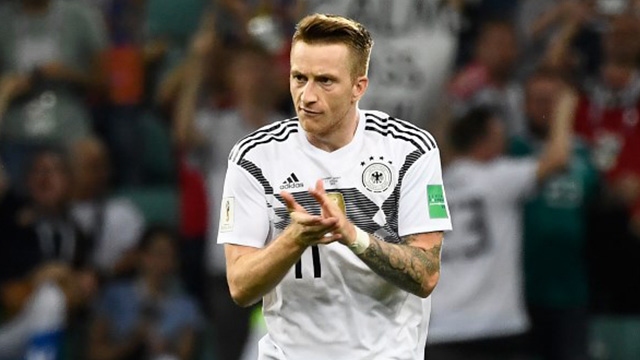 KAZAN, Russia – Marco Reus has no intention of allowing South Korea to get in the way of Germany progressing to the last 16 on Wednesday, June 27, now that the World Cup holders have already saved their skins once.

Reus was a substitute in the 1-0 defeat to Mexico, but given a starting role against Sweden he bundled in a 48th-minute leveller to drag Germany back into the game.

With seconds on the clock in Sochi, Germany secured a vital 2-1 win thanks to Toni Kroos’s superb curling shot, with Reus setting it up in a set-piece move.

It meant Germany avoided the ignominy of becoming the 6th team to crash out as World Cup holders, but they are not safe yet.

In 2014, Spain became the 5th champion team that packed up after a disastrous group-stage campaign. Germany head coach Joachim Loew’s team could still be stopped at the first round for the first time since 1938.

While the exuberant, post-match celebrations by Germany’s coaching staff upset Sweden, they belied the champion’s desire to show the rest of the world that their business in Russia is far from over.

However, the Germany team that won all 10 of their qualifiers with a whopping 39-plus goal difference has yet to convince many they deserve a place in the last 16, let alone the World Cup final.

Germany’s path to the second round is littered with obstacles.

Although South Korea sit bottom of the group without a point following defeats to Mexico (2-1) and Sweden (1-0), all 4 teams can still qualify.

Germany will go through if it wins by two or more clear goals against South Korea, who can qualify if they beat Germany and Sweden lose, and finish with a better goal difference than both teams.

After missing out on Brazil 4 years ago when Mario Goetze’s extra-time winner against Argentina handed Germany their 4th World Cup title, Reus arguably has more reason than most to make sure Die Mannschaft avoid an early departure.

“Of course, we played badly against Mexico and we had to face criticism, but we’ve been talking a bit too long about it in my opinion,” Reus told reporters on Monday.

“We have to do our duty and win the game, preferably not by just 1-0 but higher.”

On top of that, Korea has no intention of making Germany’s task any easier.

“Germany played aggressively in both of their opening matches but I think we can get a good result,” said midfielder Ju Se-jong.

“I expect them to come out strong and try to score as many goals as possible, which could allow us some space at their back.”

“We’d have to take full advantage of that with our quick counter-attacks through Seungwoo or Seonmin.” – Rappler.com