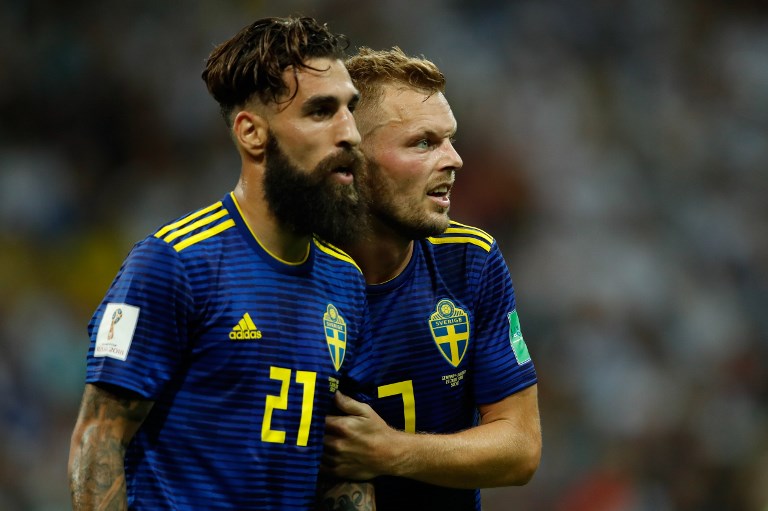 YEKATERINBURG, Russia – Sweden coach Janne Andersson must find a way to pick up his deflated players following their devastating defeat to Germany in a World Cup Group F that stands tantalisingly poised.

Sweden was on course for the last 16 until Toni Kroos stepped up with a wonderful winner in the 5th minute of injury time to rescue the reigning champions 2-1 in a Saturday-night thriller.

It left Group F on a knife-edge going into the final round of games on Wednesday, June 27, when Sweden will face Mexico in Yekaterinburg while at the same time Germany will play South Korea in Kazan.

Mexico has 6 points and one foot in the knockout rounds, with Germany and the Swedes both with 3 points and the same goal difference.

Sweden will progress if it registers a better result than Germany.

Several Sweden players were left prone on the turf such was the late, excruciating nature of the defeat to Germany.

Andersson said: “The whole group is still alive so we will have to lick our wounds and come back for the last game.”

The 55-year-old, who accused Germany’s backroom staff of “rubbing it in our faces”, also needs to deal with the delicate fall-out surrounding his winger Jimmy Durmaz.

Durmaz, born in Sweden to Assyrian parents who emigrated from Turkey, was subjected to racial hatred and death threats on social media for giving away the foul that led to Kroos’s late winner.

The 29-year-old was moved to read out a statement to reporters at the team’s Black Sea coast base in Gelendzhik on Sunday, saying of the abuse: “Who the hell does such things?

“It is completely unacceptable.”

The biggest problem for Mexico, who will have the majority of the Yekaterinburg Arena behind it on Wednesday, will be complacency.

A deserved 1-0 victory over Germany was followed by a 2-1 win against the Koreans to put it in control of the group, but it still needs a point to make absolutely sure of reaching the knockout rounds.

Goalkeeper Guillermo Ochoa said Mexico is determined to secure the result they need to make sure of top spot, revealing that the squad is fired by criticism they received from home fans before arriving in Russia.

The Mexicans were booed during a friendly win over Scotland at the Azteca Stadium.

Several members of the squad, including Ochoa, were also lambasted for their presence at a farewell party attended by around 30 prostitutes.

“We always knew we would have to fight all the way to the last game,” Ochoa said.

“We remember everything this squad has been through. We haven’t forgotten hearing the boos at the Azteca, and that has strengthened us mentally,” Ochoa said.

West Ham United striker Javier Hernandez became the first Mexican player to score 50 goals for his country – in 104 appearances – with his strike against South Korea.

As West Ham fans know well, the 30-year-old can be hit and miss, yet “Chicharito” seems to reserve his best performances for the green of Mexico.

“He’s a great goalscorer, but offers a lot more than that,” said Mexico team-mate Miguel Layun.

“He’s an incredibly dynamic player. He makes 4 or 5 runs when others might just make one.

“And he’s always in the right place at the right time,” the Porto defender told FIFA.com. – Rappler.com