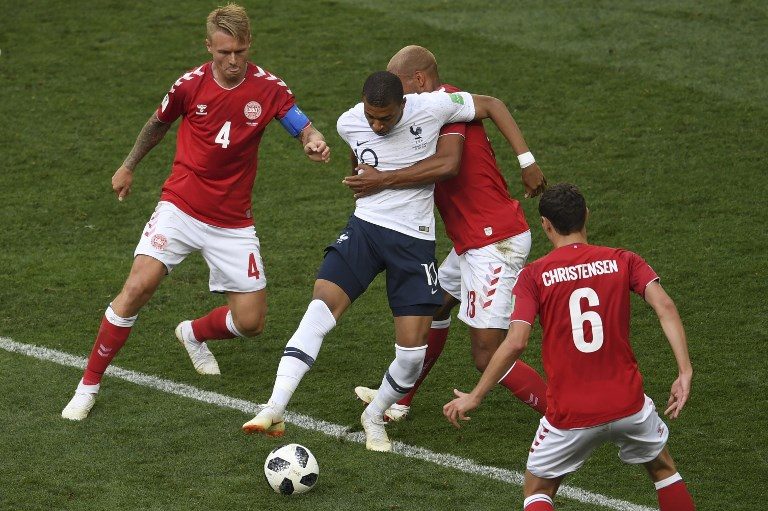 Facebook Twitter Copy URL
Copied
Both teams qualify in the last 16, but fans find no fun in the drab draw

MOSCOW, Russia – Football fans across the globe reacted with humor and anger at the “worst World Cup game ever” as Denmark and France played out the first 0-0 of the tournament on Tuesday, June 26.

France got the point they needed to clinch top spot in Group C and Denmark also qualified for the last 16 in a soporific affair.

But that did not stop the French fans watching in Moscow jeering their own team’s lack of ambition, while on social media the reaction was more rabid.

France and Denmark – such great pastries, such terrible football. #DENFRA

Gary Lineker, the former England striker and now a BBC television presenter, stuck to the facts, tweeting: “The 37/38th game of the World Cup between France and Denmark is the first goalless draw of the tournament.

“A record that surely will never be beaten.”

Most others were far less charitable.

“Wow! This Denmark-France game is officially the worst match of this World Cup!! Feel bad for the people who actually took time off work and paid to watch this nonsense,” one outraged observer, in India, wrote on Twitter.

FIFA have found France and Denmark guilty of playing the most boring game at the World Cup. Their punishment will be to rewatch the match right after their game.

From England, another Twitter user agreed: “Feel sorry for the fans that have gone to watch the DENFRA game, pathetic from both sides (especially France). It’s not even a friendly, it’s just a kickabout.”

Several called it the worst game they had ever seen at a World Cup, while others reacted more lightheartedly.

“The Denmark France game is like a boring date where the guy who asks a girl what’s the capital city of China,” joked one Twitter user.

Another said: “I once locked myself in the stairwell between my flat and the front door for three hours without a phone or a book. That was more exciting than this.”

“France and Denmark – such great pastries, such terrible football,” added another observer, while some online posted GIFs of people falling asleep.

Even the official FIFA World Cup Twitter account hinted at boredom: “Lots of huffing and puffing, but….. Both sides progress to round of 16.”

France coach Didier Deschamps insisted his side had “achieved their goal” even after a drab draw with Denmark.

Deschamps made 6 changes to the starting XI that beat Peru 1-0 and his side happily played out a mutually beneficial stalemate with Denmark, which saw the Scandinavians reach the last 16 for the first time since 2002.

“The goal is achieved. It was difficult for us too, because the teams have been very well prepared,” the 1998 World Cup-winner told French TV channel TF1.

“Facing blocks (of defenders), staying tight, it’s never easy. I made changes as well, which hurts team cohesion but it’s good for all the players to feel involved.”

A 2-1 victory over Australia and the win against Peru had already seen France into the knockout rounds, but they have been unconvincing so far in Russia despite being one of the pre-tournament favourites.

Antoine Griezmann, who was top-scorer at Euro 2016, was again a peripheral figure and failed to even complete a pass to strike partner Olivier Giroud.

“There was no need to take any undue risks,” said Deschamps. “The result suits both teams even if we had the opportunity to win this game.”

France will next face the runners-up from Group D, which could be any of Croatia, Nigeria, Argentina and Iceland.

“We are waiting to see what we are capable of in the following matches because we will have to raise the level of play, and test ourselves,” said centre-back Raphael Varane. – Rappler.com