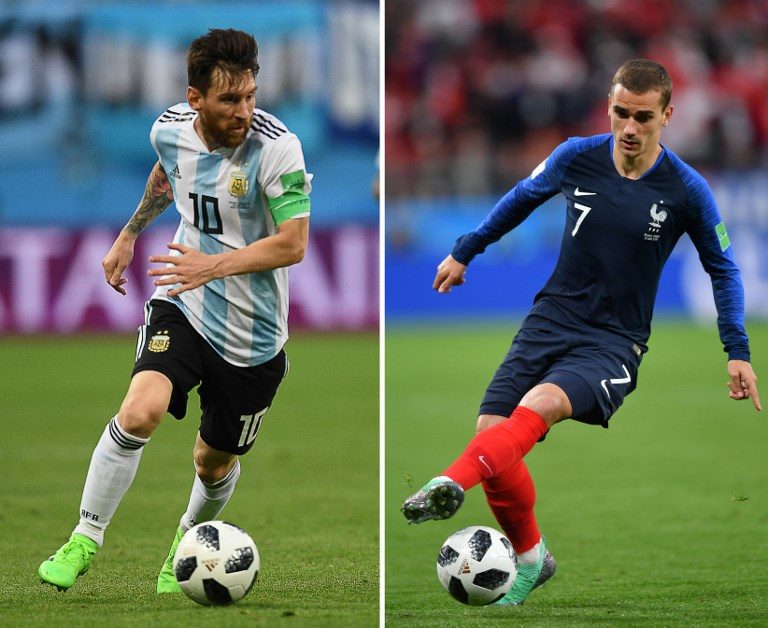 KAZAN, Russia – Argentina and Lionel Messi need to find form fast if they are to go any further in the World Cup on Saturday, June 30, when they meet a France team that has yet to live up to its billing.

The first last-16 match in Russia promises to be a fascinating clash of two underachieving sides who are supposedly on different trajectories.

All the flaws of an aging and unbalanced Argentina team were ruthlessly exposed in the thrashing by Croatia in the group stage.

But, roared on by a pumped-up Diego Maradona, Messi finally opened his account in this tournament before Marcos Rojo volleyed in a stunning winner against Nigeria as the losing 2014 finalists punched their ticket to the knockout stage.

Didier Deschamps’ France, meanwhile, among the pre-tournament favorites, has looked sluggish despite easing through the group stage unbeaten.

"We had one of the toughest groups and people don't realise that. But we still came out with two victories."#FRA's @paulpogba feels Les Bleus achievements have gone under the radar. Can he impress again, having already caught the eye four years ago?

First-choice striker Antoine Griezmann has been unable to recapture his best form and the creativity has failed to flow from midfield.

Deschamps is adamant that France will get it all right on the night when the business end of the tournament kicks off on Saturday.

“A whole new competition begins now, direct elimination,” Deschamps said. “We got what we wanted. Now the mountain looms up in front of us, but we’re there and we’re aiming to get through to the next round after that.”

Five-time Ballon d’Or winner Messi underlined his importance to Argentina with a sublimely-taken opening goal against Nigeria on Tuesday.

But it only partly made amends for the Barcelona icon’s penalty miss against Iceland in a lackluster 1-1 draw that dampened Argentine hopes from their opening match.

Messi was then virtually missing in action when Jorge Sampaoli’s men suffered the chastening defeat to Croatia.

The tension of the win over Nigeria had 1986 World Cup winner Maradona grimacing towards the sky, a crazed look in his eyes.

Maradona later played down concerns over his health after he was checked over by paramedics inside his VIP box.

Messi in a mess

But Argentina, and Messi’s health is under scrutiny too, according to former France captain Marcel Desailly.

A World Cup winner with France in 1998, Desailly told Britain’s Guardian newspaper: “We know Messi is great but we’re confused and sad for him.

“He is such a pure Barcelona product but with Argentina right now, Messi’s in a mess.”

“And let’s face it, France has yet to show anything to make us feel optimistic, to give us hope,” said Desailly.

Griezmann, particularly, is facing increasing scrutiny two years after his 6-goal, 7-assist tally steered France to the final of Euro 2016, where France lost to Portugal.

His campaign so far has been more remarkable for the controversy caused by his decision to announce his commitment to Atletico Madrid, rejecting Barcelona in the process, in a 40-minute video which aired on the eve of France’s opener.

“He’s fine, he’s fine. You mustn’t ever doubt one of the best players in the world,” said his Atletico teammate Lucas Hernandez.

Les Bleus should have the measure of Messi, according to Marius Tresor, the former France defender who helped Les Bleus to a fourth-place finish at the 1982 World Cup.

“Against Messi, they (France) will have to play intelligently,” Tresor told AFP.

“If Messi comes through the middle we have a guy called N’Golo Kante who doesn’t let people past him easily.

“On his (Messi’s) right side there’s Hernandez, who knows him well from the Spanish league.

Messi “likes to move around, so we have to try and control him.” – Rappler.com