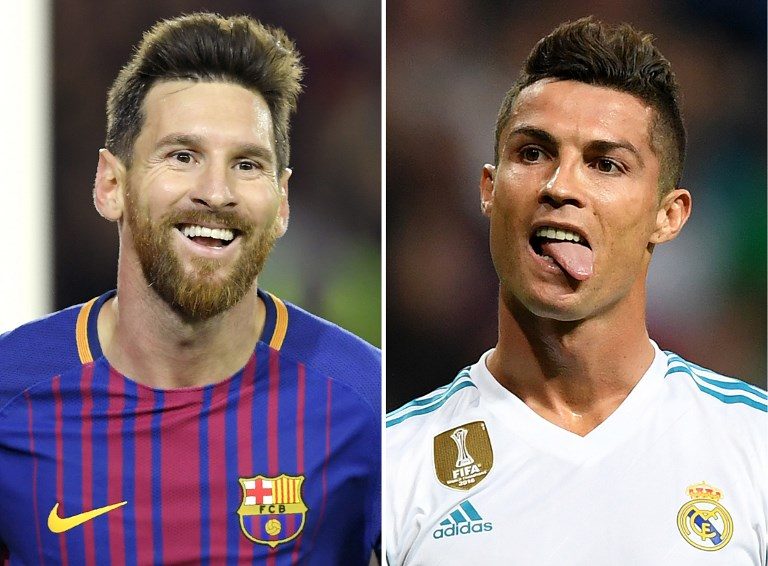 MOSCOW, Russia – Cristiano Ronaldo and Lionel Messi take center stage as the World Cup shifts into high gear at the weekend with the start of the knockout matches in the loaded top half of the draw.

Football heavyweights France, Argentina, Portugal and Brazil are all clustered in one section of the competition, with only Spain among recent winners in the other half.

The unbalanced nature of the knockout phase increases the chances of an unlikely team reaching the semifinals – and of the big guns cancelling each other out.

That scenario sparked debate ahead of Thursday’s England-Belgium group match – was it better to win and enter the tougher side of the draw or lose and face potentially easier fixtures down the line?

In the event, 3rd-ranked Belgium won 1-0, adding even more firepower to the top half, while if England can get past Colombia they will fancy their chances of reaching a potential semifinal against 2010 winners Spain.

The first phase in Russia featured just one goalless draw and already a record number of penalties, with the video assistant referee (VAR) often in the spotlight.

Of the half-dozen winners of the trophy since 1970, Germany has gone home in the biggest shock of the tournament by far while Italy never even qualified for Russia.

The standout last-16 tie on paper pits France against Messi and Argentina, two teams who labored through the group stage.

France is packed with firepower, boasting Antoine Griezmann, Kylian Mbappe and Olivier Giroud, but they have failed to click so far, finding the net just 3 times in 3 matches – one was a penalty and another an own goal.

“It’s make or break. We don’t have any choice. We have to do everything possible to make sure it goes well for us,” said France coach Didier Deschamps.

There you have it…The last 16 have been confirmed. #WorldCup pic.twitter.com/7fazrsa9Jy

Five-time world player of the year Messi underlined his importance to Argentina with a sublimely taken opening goal against Nigeria but that came after his penalty miss against Iceland in a lackluster 1-1 draw that set the tone for a disappointing campaign so far.

Ronaldo on the other hand started his tournament with a hat-trick against Spain but has slipped behind England’s Harry Kane in the race for the Golden Boot after seeing his penalty saved in Portugal’s 1-1 draw with Iran.

The Real Madrid star, who has 4 goals in Russia and looks certain to be crowned world player of the year for a 6th time, will come up against a tight Uruguay defense that did not concede a single goal in the group phase.

Aside from their watertight defense, two-time winners Uruguay boast two of the greatest goal-scorers of their generation in Luis Suarez and Edinson Cavani.

The Uruguayans are aware that Ronaldo is not the only threat for the European champions – he is supported by younger talents such as Bernardo Silva and Goncalo Guedes.

“We will mark him with the same respect we mark everyone, despite him being a superstar,” said Uruguay’s Sebastian Coates of Ronaldo. “You don’t prepare a match just looking at one player.”

Pierluigi Collina, the chairman of FIFA’s referees committee, said on Friday he was pleased with the impact of VAR at the tournament but that it did not mean all decisions would be perfect.

“VAR doesn’t mean perfection,” Collina said. “There could still be some wrong interpretation or even mistakes, so it’s a not a perfection that can be reached having implemented VAR.”

Debate was still raging over Japan’s approach to their final group game against Poland after the Asian side sneaked into the last 16 on the back of their superior disciplinary record.

The Asian side faced an angry backlash for running down the clock at walking pace in the last 15 minutes even though they were losing 1-0 on Thursday, gambling that Senegal would not equalize against Colombia in the other Group H game.

Kozo Tashima, president of the Japan Football Association (JFA), insisted the team deserved a place in the knockout stage in Russia, won at the expense of the west African team by virtue of having picked up fewer yellow cards.

FIFA said it had no plans to change its fair play criteria.

“This is the first time (the fair play rule) has been used in a senior World Cup in this way. Obviously what we want to avoid is the drawing of lots,” said Colin Smith, FIFA’s chief competitions and events officer.