Cavani optimistic over injury after firing Uruguay into quarterfinals

Jul 1, 2018 3:01 PM PHT
Agence France-Presse
Facebook Twitter Copy URL
Copied
The Paris Saint-Germain striker fires all of Uruguay's goals in a 2-1 win over Portugal before hobbling off the pitch with a calf problem 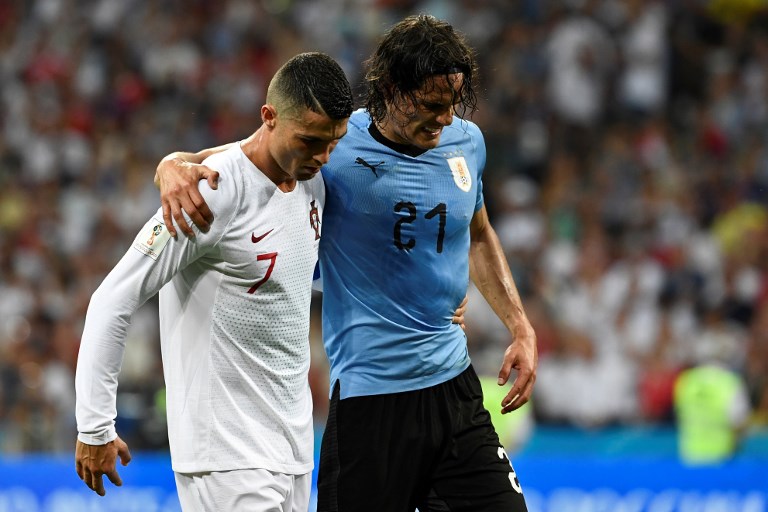 SOCHI, Russia – Edinson Cavani is hopeful he will be fit in time to face France in the World Cup quarterfinals despite coming off hurt in Saturday’s victory, June 30, over Portugal.

The Paris Saint-Germain striker scored both his side’s goals in the 2-1 victory in Sochi in their last-16 tie, before hobbling off with a calf problem.

“I just felt something at one point and couldn’t recover. I hope (to be fit), I’ll do everything to make sure I can take to the field with my teammates,” Cavani told journalists after the game.

“It hurts a little bit, but we will see how it looks tomorrow.”

Uruguay is due to play France in the last 8 on Friday, July 6, in Nizhny Novgorod, and veteran coach Oscar Tabarez said he was “worried” for Cavani.

He had to be helped off the pitch by Portugal skipper Cristiano Ronaldo and was replaced by Cristhian Stuani in the 74th minute of the game at the Fisht Stadium.

“Our next game is in 5 days which is not a lot of time, but after today we will rest. Obviously we are worried but we don’t know exactly what the problem is,” Tabarez said.

Cavani headed in a Luis Suarez cross to open the scoring in the 7th minute and then curled in a brilliant 62nd-minute winner after Pepe had equalized for Portugal.

“It was a mistake from us that cost us the equalizer but luckily we found some space and the team stayed strong mentally,” said Tabarez.

“I am very pleased, we prepared for this, the injury was an inconvenience and we will see how it evolves.”

Uruguay’s formidable defense will now hope to stand up to the threat of the French attack, after Kylian Mbappe inspired them to a thrilling 4-3 win over Argentina earlier on Saturday.

“Now we have a very strong opponent in France. I can’t give a very in-depth analysis because I was getting dressed while their game was on and in the last 15 minutes I was giving my team-talk”

“But I think France’s strong point is their attack with (Antoine) Griezmann and Mbappe and their exceptional pace. If you give France space it becomes very difficult.”

Tabarez added: “We didn’t presuppose anything coming here. The players came to play 7 matches. We will see if we can do it.” – Rappler.com