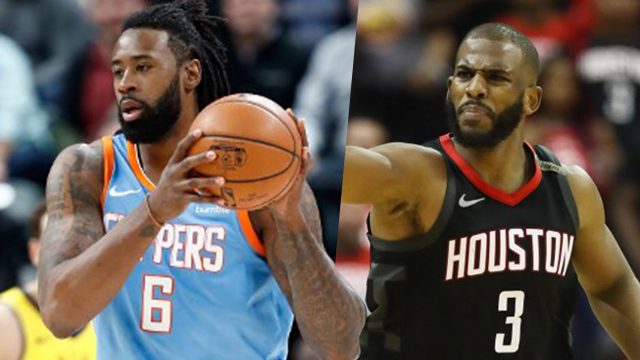 DeAndre Jordan, the last remaining piece of the original “Lob City” squad that launched the Los Angeles Clippers to relevancy, has “verbally agreed” to a one-year, $24.1-million deal with the Dallas Mavericks, according to the New York Times’ Marc Stein.

DeAndre Jordan and the Dallas Mavericks have verbally agreed on a one-year deal approaching the $24.1 million option with the Clippers for next season that Jordan relinquished Friday, according to league sources

Harrison Barnes, Wesley Matthews, Seth Curry, JJ Barea, and the aging but still effective Dirk Nowitzki will be returning for the Mavericks next season.

On the other side of the feared Texas Triangle, Paul will be completing some “unfinished business” with newly-minted NBA MVP James Harden in Houston.

The Rockets were most notably one win away from the NBA Finals against the eventual champion Golden State Warriors until “CP3” tweaked his hamstring and sat out Games 6 and 7, which the Warriors quickly won.

On that note, paying the 32-year-old Paul $40 million a year until he’s 36 is a huge gamble on the part of the Rockets.

Over the last few years with the Clippers and now Houston, the “Point God” couldn’t answer fans’ prayers for an NBA championship due to recurring and untimely injuries. The same issue remains, now with a way heftier price tag.

We’ll let this fan sum it up:

Your whole career is unfinished business.