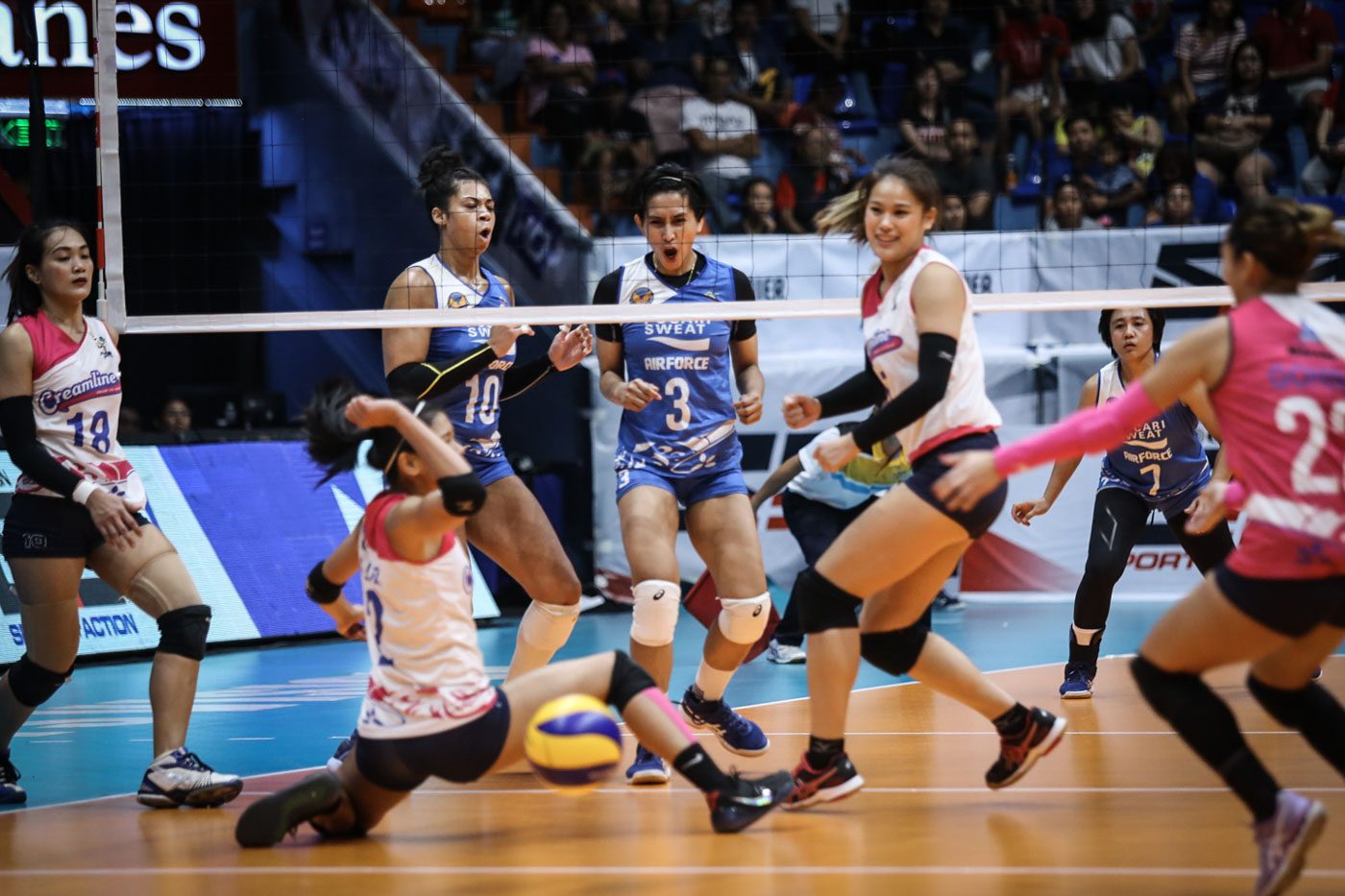 Facebook Twitter Copy URL
Copied
The No. 4 Lady Warriors pull off a surprising sweep of the top seed Cool Smashers

MANILA, Philippines – Pocari-Air Force stunned top seed Creamline, 25-23, 25-12, 25-23, to zero in on the finals berth of the Premier Volleyball League Reinforced Conference at the Arena in San Juan on Sunday, July 1.

The No. 4 Lady Warriors rallied from a pair of 6-point deficits in the early going then fought back from down 18-21 in the 3rd set by winning 7 of the last 9 points behind Arielle Love en route to the sweep.

Pocari-Air Force made quick work of the demoralized Cool Smashers in the second set before taking control in the 3rd set to gain a 24-21 advantage off a Love off-the-block hit.

“I think our advantage is that we had played continuously in the quarters while they came off a long break,” said Pocari head coach Jasper Jimenez.

“We had to go through the eye of a needle to get here. And that was our motivation.”

Love fired 15 kills and came up with 4 kill blocks for a 20-point output while fellow American import Maddie Palmer added 12 hits in the win.

Pablo hammered in 9 points and added 12 excellent receptions for the Lady Warriors, who produced an impressive 13-kill block effort to highlight their superb net defense.

The victory puts the Lady Warriors on track of another crack at the championship they won over BaliPure in sudden death last year.

It was a sorry setback for Creamline, which beat Pocari in 4 sets in the elims and looked headed to reasserting its mastery after a strong start.

But the Cool Smashers crumbled at the finish of the opening set and never recovered in the second frame.

Valdez finished with 16 points on a 14-of-48 attack clip while Thai import Kuttika Kaewpin struggled with 6 hits and Nina Asceric replacement Laura Schaudt groped for a single hit.

Thai import Jutarat Montripila unleashed a 30-point game, powering the Perlas Spikers to their 8th straight win and closer to the championship round.

Like Pocari, BanKo-Perlas goes for the clincher on Wednesday, July 4. – Rappler.com