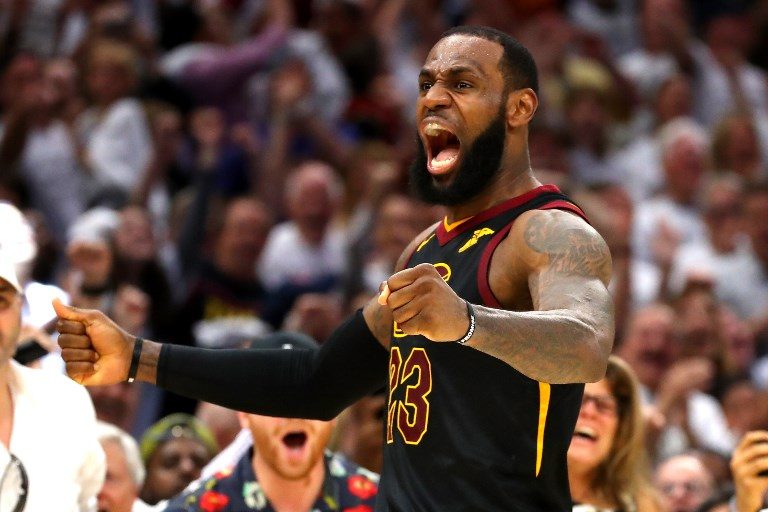 Facebook Twitter Copy URL
Copied
From moving from apartment to apartment, 'The King' transforms into one of the richest athletes in the world

WASHINGTON, USA – LeBron James has already beaten the odds just by rising from the poor son of a single teenage mother to become one of the world’s highest paid sports superstars.

Now the 3-time NBA champion and two-time Olympic gold medalist, ranked by Forbes magazine as the 6th-richest athlete in the world with annual income of $85.5 million, is taking his talents to the Los Angeles Lakers.

Agents for the 33-year-old playmaker said Sunday, July 1, that James has agreed to a 4-year contract worth $154 million with the Lakers, who haven’t reached the playoffs in a club record 5 seasons.

James was born in Akron, Ohio, moving from apartment to apartment in rough neighborhoods until his mother allowed him to move in with a prep football coach at age 9, when he became exposed to basketball.

“King James” was a prized talent even before he reached the NBA. His high school games were shown on ESPN and often moved to a college gymnasium to meet ticket demands.

He also became the first high school player on the cover of Sports Illustrated. And his skills made him a consensus top pick for the 2003 NBA Draft.

After the Cleveland Cavaliers went a league-worst 17-65, they won the 2003 NBA Draft Lottery and selected nearby prep star James, who became NBA Rookie of the Year in 2004.

Improving each season, the Cavaliers, who hadn’t won a playoff series since 1993, rose to reach the NBA Finals in 2007, powered by James, who scored 45 points in an Eastern Conference Final showdown against Boston. The Cavs were swept by San Antonio but James showed his high-leaping, acrobatic skills were at an elite level.

James was the All-Star Game Most Valuable Player in 2008 and season MVP in 2009 and 2010, when the Cavaliers won 66 and 61 games but could not reach the finals. (READ: Lakers snap up NBA champ JaVale McGee)

The failure convinced James it was time to leave and in a televised reveal, James moved to the Miami Heat alongside stars Chris Bosh and Dwyane Wade. James won his first NBA crown in 2012 and another in 2013 but lost finals with Miami in 2011 and 2014.

Then came another shocker. James returned home to Cleveland declaring he wanted to make the Cavs a champion and end Cleveland’s sports drought, dating to the 1964 NFL Browns.

Together with Kyrie Irving and Kevin Love, James lifted the Cavaliers into the 2015 NBA Finals, where they lost to Golden State. But in 2016, James made his dream come true as Cleveland made the greatest comeback in NBA Finals history, rallying from 3-1 down to take the series in 7 games and spark an epic celebration like the city had never seen.

But Golden State added Kevin Durant in the wake of defeat and beat the Cavs in the past two NBA Finals, their dynasty more than Cleveland could handle, no matter how they assembled talent around James.

The futility of a sweep loss to Golden State last month set the stage for James, who could not carry the outmatched Cavaliers to a single victory.

“When you have a goal and you’re able to accomplish that goal, it actually, for me personally, made me even more hungry to continue to try to win championships,” James said after the last loss.

That’s where he will be with the Lakers. (READ: Lance Stephenson joins LeBron James, Lakers)

“I love to compete,” James said. “At the end of the day, no matter win, lose or draw, being a part of the biggest stage in our sport is something that I’ve always loved and never taken for granted.