Australia says it had ‘pure’ intentions after PH Arena incident 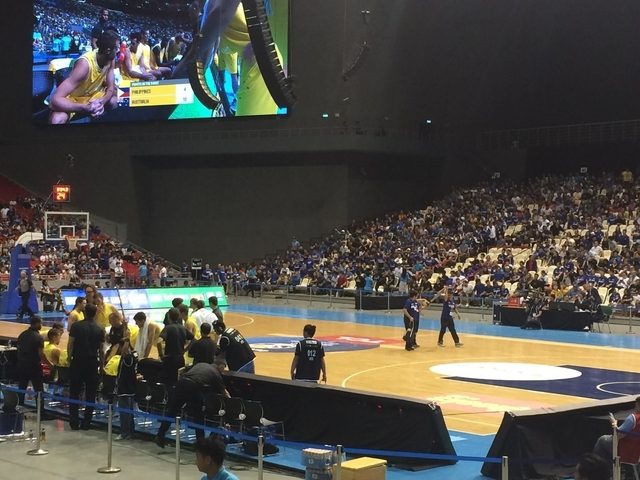 Facebook Twitter Copy URL
Copied
The Aussies apologize for ripping off the hardcourt decals of Gilas Pilipinas' corporate sponsors, but point out that their only concern was player safety

MANILA, Philippines – Australia said it did not intend to disrespect Philippine basketball after it removed FIBA-approved stickers at the Philippine Arena without asking for permission, reiterating its only concern was player safety.

The Aussies found themselves in hot water after ripping off the hardcourt stickers – Gilas Pilipinas’ corporate sponsors’ decals – during a closed door practice on Sunday, July 1, a day before facing the Filipinos for their final game in the first round of the 2019 FIBA World Cup Asian Qualifiers.

“We never intended to be disrespectful or to challenge Philippine basketball,” said Australia team manager Mark Bradtke in a statement provided to the media.

“Our intentions were pure in rectifying what was potentially a player safety issue for all participants.”

Australia had cited that the stickers were slippery and could cause injuries. Coming off a stunning 78-79 loss to Japan last June 29, the Aussies said they just wanted the best, not just for their players but the Philippines’ as well.

“As our loss against Japan shows, this is a very tough competition, and we wanted the best environment for all players whose health and safety is critical.”

Samahang Basketbol ng Pilipinas’ president Al Panlilio said they were “good” with Australia’s apology but maintained that what the visitors did “weren’t acceptable.”

Despite all of the controversy, the court decals were replaced just in time before the two teams locked horns.

“We are very happy with the new court decals. Our concerns were alleviated,” Bradtke added. (READ: Gilas backers upset as Australia removes stickers at PH Arena)

“We look forward to using this situation as a building block for basketball to having the best environment for all participants, officials, and fans, and lastly, to maintain our great relations with Philippine basketball.” – Rappler.com