Gilas loses to Australia by default in World Cup Qualifiers

Jul 2, 2018 9:59 PM PHT
Delfin Dioquino
Facebook Twitter Copy URL
Copied
The Filipinos are left with no players to field with 9 ejected and the 3 remaining fouling out 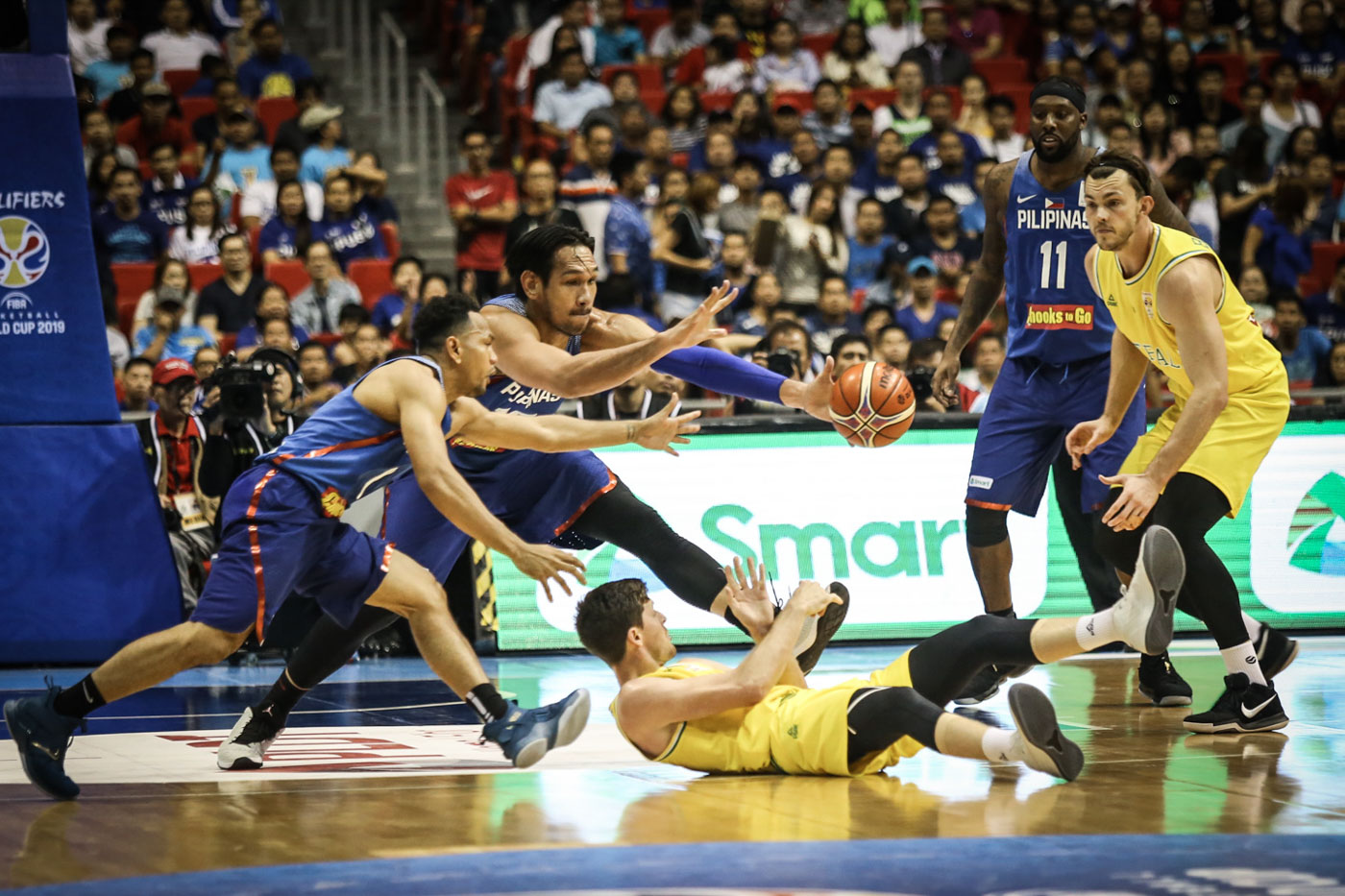 BOCAUE, Philippines – Gilas Pilipinas lost to Australia in the most absurd way as it had no players left to play the Aussies, 53-89, at the end of the first round of the 2019 FIBA World Cup Asian Qualifiers at the Philippine Arena here on Monday, July 2.

The game ended with less than 14 minutes left to play with 9 Gilas players ejected and the remaining 3 fouling out.

June Mar Fajardo, Gabe Norwood and Baser Amer had to face the Boomers – who only had 4 players thrown out, namely, Nathan Sobey, Christopher Goulding, Daniel Kickert and Thon Maker.

However, Fajardo and Norwood eventually fouled out and the contest had to be ended even with Amer still eligible to play as FIBA rules state at least two players should be on the court for the game to continue.

Australia caps off the first round of the Qualifiers at the top of Group B with a 5-1 card while the Philippines settles for second with a 4-2 record. Both teams advance to the second round, which will begin in September.

Things took an ugly turn with 4 minutes left in the 3rd quarter as Pogoy shoved Goulding to the ground. In retaliation, Kickert decked Pogoy with his forearms – sparking the scuffle.

Castro, running from near-halfcourt, landed a punch on Kickert as his teammates joined the free-for-all.

Maker, a sophomore center for the Milwauke Bucks, started unleashing flying kicks, most notably against Romeo but entirely missed.

In the replay, Allein Maliksi and Jio Jalalon, who are both part of Gilas’ pool but were not included in the lineup against Australia, were seen landing punches against the Australians.

Maliksi unloaded a barrage of blows on Goulding while they were both entangled at the floor while Jalalon connected on a solid hook on Sobey’s head.

Even the fans joined the skirmish, throwing plastic bottles at the court. A man wearing a ‘Pilipinas’ shirt, threw a chair at Sobey’s head.

It was a close bout with Gilas trailing by just 3 points early in the second quarter, 20-23, until the Aussies began to pull away as they uncorked 9 unanswered points for a 32-20 advantage – a lead that ballooned to 15, 52-37, at halftime.

Goulding carried Australia in the 3rd quarter with his torrid outside shooting, burying 3 straight triples that extended the Boomers’ lead to 31 points, 79-48, before the melee transpired.

Goulding fired 20 points on a 4-of-5 clip from deep to lead Australia. Kickert finished with 12 points and Matthew Dellavedova had 9 points, 4 assists, 4 steals and 3 rebounds in the win.

Blatche chalked up 12 points, 10 rebounds and 3 assists to pace the Filipinos while Fajardo churned out 10 markers.