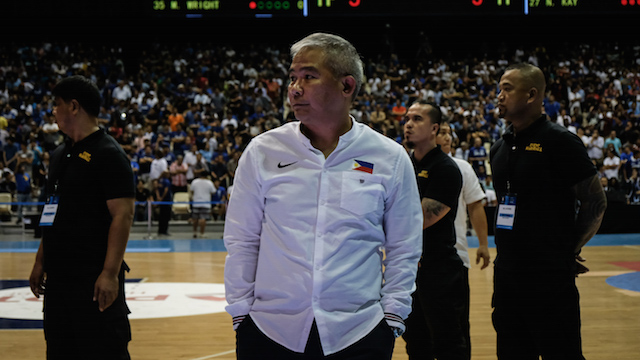 BOCAUE, Philippines – Gilas Pilipinas head coach Chot Reyes said the  bench-clearing brawl between the Philippines and Australia was “absolutely unacceptable,” but called out one Australian player for provoking the Filipinos even before the FIBA World Cup Qualifier match on Monday, July 2, at the Philippine Arena.

Reyes immediately singled out Daniel Kickert and defended his team’s actions, claiming the Aussie hit 4 Filipino players during the warm-ups.

“It’s absolutely unacceptable but the reality is that (Daniel) Kickert [was] hitting our players during the warm-ups. He hit Carl Bryan Cruz, he hit Matthew Wright, Pogoy and he hit Calvin Abueva during the warm-ups,” recalled Reyes.

“So when he did that, the foul of Pogoy on Goulding was an offensive foul, it was a basketball play, but he (Kickert) was the one who came in and decked Pogoy. 5th time. You don’t expect to do it to a team 5 times and not expect to to retaliate.”

The team management tried to pacify the players who got infuriated with Kickert’s taunting, but none could restrain them during the 3rd quarter melee.

“We already told them ‘huwag niyo ng pansinin (don’t mind them), focus on the game,’ but you know, after that when he did that in the 3rd quarter, it’s hard to restrain them anymore,” added Reyes.

Netizens both from the Filipino and Australian side were “disappointed” of their respective team’s actions. Even PBA players were “embarrassed” how Philippine basketball was presented to the international stage.

However, Reyes explained that the world did not know the situation of the team since their arrival on the court for the warm-ups.

The Australia Boomers won the game by default, 89-53, as Baser Amer was the only player left in the roster after 9 Gilas players were ejected and June Mar Fajardo and Gabe Norwood fouled out of the game. – Rappler.com