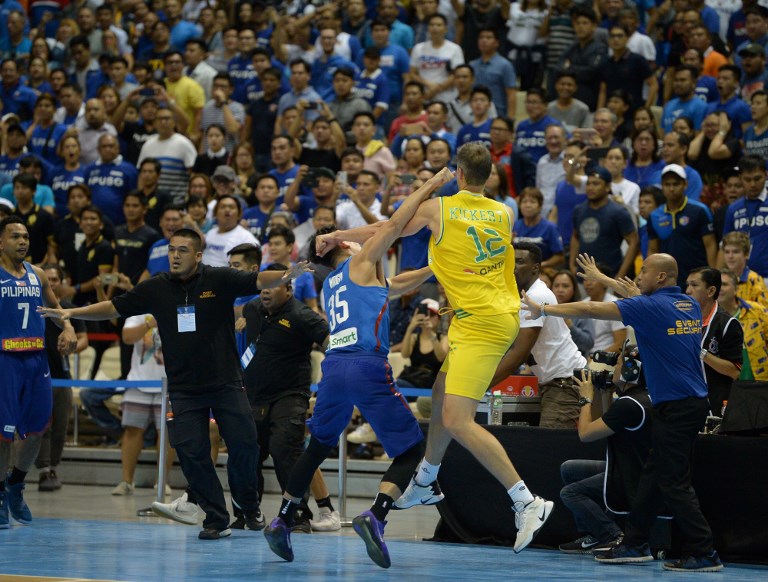 He also hit out at Filipino players on Wednesday, July 4, for taking “gangster selfies” after the ugly clash.

The brutal melee in Manila involving players, fans and officials on Monday left the Australian team fearing for their safety, and they sought embassy help to fast-track their departure from the country. (READ: Aussies ‘feared for safety’ after Manila basketball brawl)

They arrived home on Wednesday morning and assistant coach Longley, the first Australian to play in the NBA, where he spent 10 seasons, said the violence was the worst he had ever seen on court.

“I’ve never seen anything like that, not even on YouTube. I do believe that their coach Chot Reyes incited them to come out and thug us,” said Longley, who won 3 NBA championships alongside Michael Jordan at the Chicago Bulls.

“I think there’s video evidence of that. Then he substituted a thug out there, who took 3 or 4 cheap swings at ‘Bubbles’ (Chris Goulding).”

Reyes, though, had already issued a statement on the incident. (READ: Chot Reyes clarifies ‘hit somebody’ comment before FIBA brawl)

Thirteen players were ejected after the all-in fight between the Gilas Pilipinas and the Boomers in the 3rd quarter, which was hashtagged #basketbrawl as footage and condemnation went viral. (LOOK: Bench-clearing brawl mars Gilas-Australia game)

What was already a bad-tempered game erupted in the 3rd quarter when Philippine player Roger Pogoy knocked Goulding to the ground and Daniel Kickert retaliated by flattening Pogoy with a flying elbow.

Longley, who rushed to the aid of Goulding as he was set upon by a dozen Filipino players and officials, claimed Reyes was “embarrassed” by how his team was playing and urged them to hit back at the Boomers.

He pointed to footage of an angry Reyes during a time-out telling his players to “hit somebody.”

“He wouldn’t look me in the eye at the end of the game when I shook his hand, and I think he was embarrassed and… if you listen to his diatribe after the game, I think it verifies it,” said Longley in Brisbane.

“I’m upset with him more than anybody, and to let his team take selfies, gangster selfies on the line after an event like that, that shows total lack of control or respect.” (READ: Disgraceful, embarrassing: Netizens dismayed with Gilas-Australia brawl)

Basketball Australia chief Anthony Moore has said his side accept responsibility for their part in the brawl while the Philippines federation offered apologies to fans and the basketball community, but not Australia.

Kickert, whose retaliatory elbow sparked the fight, said he regretted his actions, with a long suspension likely.

“I regret those things, but I’m going to let FIBA do everything they need to do, to take the time, go through the process and come to the answers that they see fit and bring down the sanctions they bring down,” he said. – Rappler.com