Brawl aftermath: ‘No place on any basketball court’ 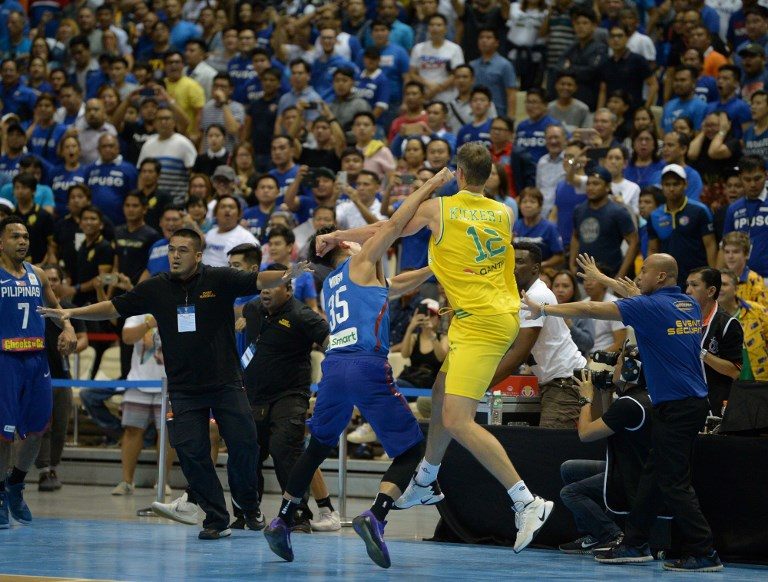 MANILA, Philippines – The basketball federations of the Philippines and Australia assumed responsibility for the bench-clearing brawl that broke out in the FIBA World Cup Asian Qualifiers at the Philippine Arena on Monday, July 2.

Al Panlilio, president of the Samahang Basketbol ng Pilipinas (SBP) and Ned Coten, president of Basketball Australia (BA), issued a joint statement on Thursday, July 5, noting that the “actions displayed have no place on any basketball court.”

Both officials also said the federations are “collaborating in the ongoing proceedings to investigate the incidents.” (READ: SBP president braces for suspensions, sanctions for FIBA brawl)

FIBA, the world governing body for basketball, already started its probe on the stunning free-for-all that led to the ejection of 9 Gilas Pilipinas players and 4 Boomers. (READ: Gilas loses to Australia by default in World Cup Qualifiers)

“We will do everything in our power to prevent this from happening again,” the statement said.

Both federations also apologized to the basketball community worldwide for bringing the sport “into disrepute.”

The SBP, team officials and several Gilas players had issued their apologies the past days.

“Basketball has a unique power to unite and we look forward to continuing bringing people together in the true spirit of friendship and sportsmanship in future games,” the statement said.