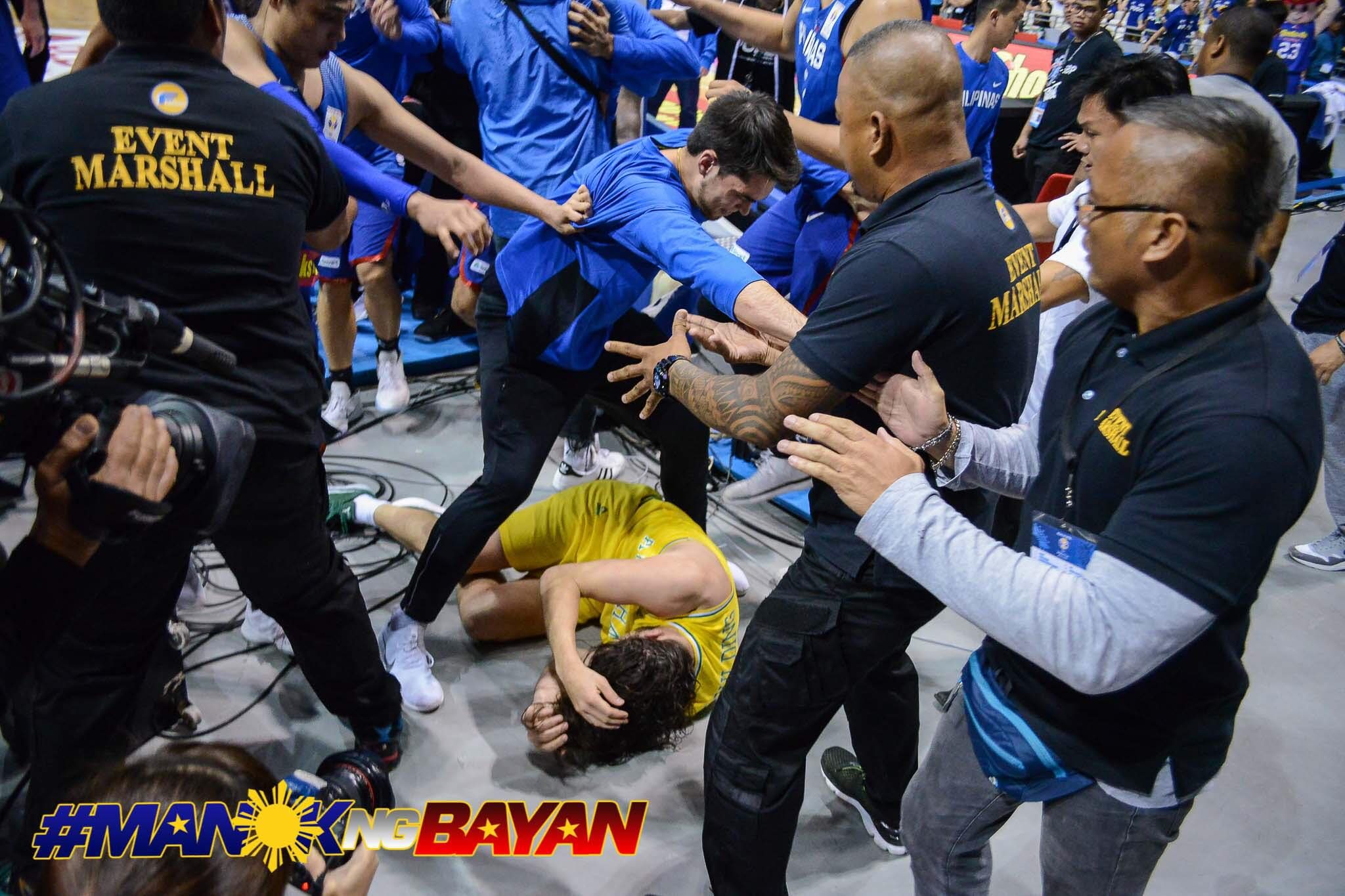 At least that’s what Australian player Chris Goulding thinks after the July 2 melee in the FIBA World Cup Asia qualifier at the Philippine Arena in Bulacan.

“I think (Australian deputy) Luc Longley spoke on it yesterday that we were playing some good basketball. We got up big. And I think, the overriding thing, is that they (Gilas) weren’t happy with that. They were a little embarrassed,” Goulding said in an interview with Sunrise TV show in Australia on Thursday, July 5.

“They sent a player out to try and get under our skin… hit some elbows.”

Longley had slammed Gilas coach Chot Reyes for inciting his players to “come out and thug” their team. (READ: Australia coach blames Chot Reyes ‘more than anybody’)

Goulding was in the middle of the melee as Roger Pogoy’s hard foul on the Australian guard prompted his teammate Daniel Kickert to retaliate by planting an elbow on the Gilas guard.

That sparked the bench-clearing incident and many pounced on Goulding, who fell and got attacked while lying on the floor by a mad mob that included Gilas pool player Allein Maliksi and national team deputy coach Jong Uichico.

Gilas cadet Troy Rike tried to shield Goulding before Longley pulled him out from the ugly scuffle.

Goulding, who sustained a black eye and some bruises, said the moment felt like a “hell of a long time.”

“To be honest, at that time, I don’t wanna say I went into survival mode, but as you say, I was on the ground. There were a lot of people on top of me, punching and kicking. So I was just really trying to tuck my head, protect my head, and sort of wait it out,” he said.

“It’s just something you never think you would experience,” Goulding also told SEN Radio. “It felt like a hell of a long time.”

Chris Goulding is happy to be home safe and sound following the ugly incident that unfolded in the Philippines.

The @BasketballAus Boomers' star guard recounted the ordeal and passed on an important message to basketball playing kids on @sunriseon7 this morning. pic.twitter.com/BI7RUchU8y

Goulding said he just feels proud that most of his teammates managed to restrain themselves.

“[If] you actually see some alternative angles of how my teammates handled themselves, they wanted to get out there, they wanted to help,” said Goulding. “They were really disciplined that they didn’t have to come on court. And in the end, that’s why we won the game.”

The Philippines ended up losing the game by default as 9 Gilas players got ejected for joining the fracas while 2 of the 3 players left on the floor eventually fouled out. FIBA rules state at least two players should be on the court for the game to continue. (READ: Gilas loses to Australia by default in World Cup Qualifiers)

“There hasn’t been a lot of sleep since the incident,” said Goulding. “Physically, I’m surprisingly really good. Small black eye and a couple of bumps and bruises, but that’s about it.” – Rappler.com