Serena: ‘There’s an aura, that’s what makes me great’ 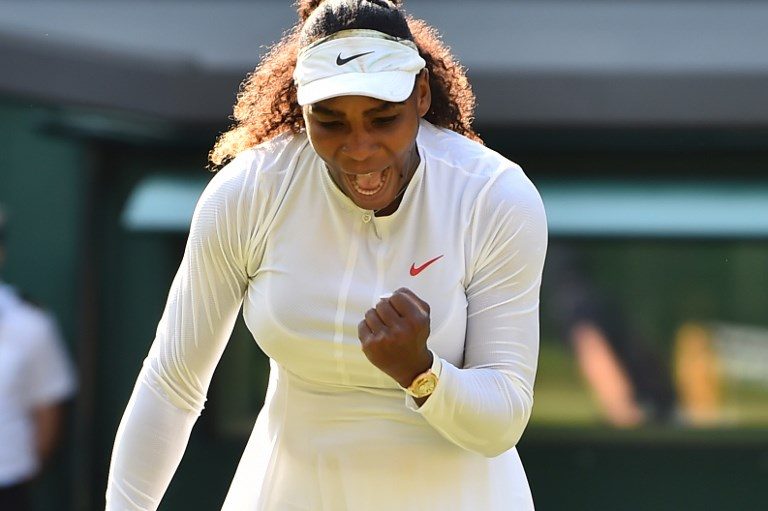 LONDON, United Kingdom –  Serena Williams believes there is an “aura” surrounding her when she plays and has no hesitation in describing herself as “great.”

The 36-year-old American was reacting to US compatriot Madison Keys claiming that “it must suck” being Williams as every woman wants to claim her scalp.

“I’m glad someone admitted that,” said Williams, who stayed on course for an 8th Wimbledon title on Friday, July 6, with a 7-5, 7-6 (7/2) win over France’s Kristina Mladenovic.

“Every single match I play, whether I’m coming back from a baby or surgery, it doesn’t matter, these young ladies, they bring a game that I’ve never seen before.

“It’s interesting because I don’t even scout as much because when I watch them play, it’s a totally different game than when they play me.

“That’s what makes me great: I always play everyone at their greatest, so I have to be greater.”

Williams, 36, is playing just her second Grand Slam since the birth of her daughter Olympia in September last year.

She made the last 16 at the French Open before a pectoral injury forced her to pull out.

She is back in the 4th round of Wimbledon where she will face Russian qualifier – and fellow mother – Evgeniya Rodina on Monday.

“Yeah, there’s definitely that aura, that kind of thing of playing Serena,” added the American.

“At the same time these women are proud. They don’t go out there and say, I’m going to lose because I’m playing Serena.

“They go out there and say, I’m going to play hard because I’m playing Serena.”

Keys, who was knocked out by Rodina 7-5, 5-7, 6-4 despite having led 5-2 in the first set, admitted she had let her mind wander to what it would be like having to face Williams in the next round.

While she was daydreaming, world number 120 Rodina pounced.

“It must suck every match,” said Keys when asked what it must feel like being Williams and spending the best part of two decades being hunted down by rivals.

“It just gives even more props to her.”

Serena has not met a fellow seeded player at the tournament so far and would not until the semifinals at the earliest.

If she gets past Rodina on Monday, she would go on to face either Italy’s Camila Giorgi or Ekaterina Makarova of Russia in the quarter-finals.

She cannot face sister Venus in the semifinals after the 5-time champion was knocked out by Kiki Bertens of the Netherlands 6-2, 6-7 (5/7), 8-6.

While the women’s draw was being blown wide open, it was business as usual for defending men’s champion Roger Federer who enjoyed a 6-3, 7-5, 6-2 win over Germany’s Jan-Lennard Struff.

Serena said she was delighted to be into the second week at Wimbledon.

“I have worked really hard and it’s been a long arduous road,” said Serena. “A lot of top players have lost. Technically I am not a top player although I have the wins of one.”

Venus, 38 and the runner-up last year, was worn down by Dutch 20th seed Bertens who next faces Pliskova.

“It means a lot. It was such a tough match and such a big fight so I’m really happy that I won this one,” Bertens said.

Also exiting was 10th seed Madison Keys, who had made at least the quarterfinals of her last 3 majors.

“I have played the quallies and 3 matches this week which were all three sets,” said 29-year-old Rodina.

“She hits the ball so hard. I am a little surprised that I won, I was a little bit lucky.”

Federer took his consecutive sets won at Wimbledon to 29 in what was his 200th career grass court match.

The 8-time champion will face French 22nd seed Adrian Mannarino on Monday for a place in the quarterfinals.

“I was happy to stay clam and finish off the job. I thought I did very well today,” said the 36-year-old 20-time Slam winner.

“I created more chances in the second set and was always able to stay pretty clean on my own service games.”

Stefanos Tsitsipas became the first Greek man in the Open era to make the last 16 of a Slam as the 31st seed beat Italian qualifier Thomas Fabbiano 6-2, 6-1, 6-4.

The 19-year-old will faces US ninth seed John Isner for a place in the quarterfinals.

Zverev had trailed two sets to one when his tie with Fritz was halted due to darkness on Thursday.

But the 21-year-old raced away with the last two sets in Friday’s bright sunshine.

“Stopping last night was not a nice feeling to go to bed with,” said Zverev who said he had vomited on Friday due to a stomach bug and came close to quitting.

Russia’s Ekaterina Makarova defied second round victim Wozniacki’s churlish prediction that she wouldn’t progress further in the tournament by reaching the last 16.

Makarova, who made the quarter-finals four years ago, beat a weary-looking Lucie Safarova of the Czech Republic 4-6, 6-1, 6-4.

South Africa’s Kevin Anderson, seeded eight, swept past Germany’s Philipp Kohlschreiber 6-3, 7-5, 7-5 on the back of 22 aces and 42 winners.

Anderson has reached the last 16 for the 4th time and goes on to face France’s Gael Monfils. – Rappler.com