With Jayson Castro out, Terrence Romeo dazzles in passing display 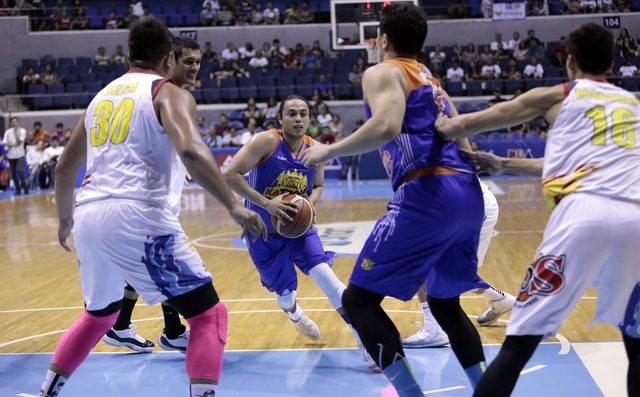 MANILA, Philippines – Terrence Romeo showcased he is more than a shoot-first point guard as he tallied a career-high in assists in TNT KaTropa’s 100-85 victory over the top-seed Rain or Shine Elasto Painters on Saturday, July 7.

Bucking off a rough shooting night that saw him score just two points on a 1-of-6 clip, the 26-year-old accounted for almost one-third of the KaTropa’s total 29 assists and was 5 dimes short of Rain or Shine’s 17.

Even if he did not score as much as expected, Romeo was the most efficient man for TNT, finishing with a whopping plus-minus of +30.

(The defense was collapsing on me so I had to find the open man. I know all of my teammates are capable scorers so I did not want to force the issue.)

For Racela, Romeo is valuable either as a scorer or a facilitator as long as he plays the game “correctly.”

“He should have 12 assists because he wasn’t taking shots. I think he was practicing his passing skill earlier so that’s why he had 12 assists,” said Racela.

“If he looks to pass, he could hit the open guy. If he looks to shoot, he could get through the net so yeah, as long as he plays the game correctly, he should serve us well.”

With the win, the KaTropa secured the No. 3 ranking heading into the quarterfinals but Romeo said that is just the beginning of their quest for the Commissioner’s Cup.

(The 3rd seed is not our goal and we will try to play better in the playoffs. That is what we need, to get into the semis and we will see from there.) – Rappler.com