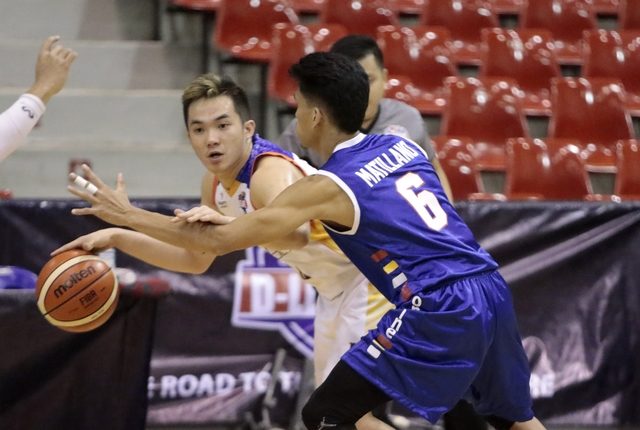 MANILA, Philippines – Go for Gold could do no wrong as it dominated the lackluster AMA Online Education, 135-91, for its 5th win in the 2018 PBA D-League Foundation Cup at the Ynares Sports Arena on Monday, July 9.

Seven players breached double figures for Go for Gold in a game that saw the Scratchers pull away for good from the Titans as early as the first quarter with a 17-point lead.

Leading 34-17 after the maiden period, the Scratchers continued their domination and ended the first half with a comfortable 26-point cushion, 60-34.

It was the same story in the 3rd quarter as James Martinez and Paul Desiderio bombarded AMA with triples to start the period on an 11-2 spurt, 71-36. Go for Gold headed into the final frame with a 99-61 lead.

Pili and Dan Wong kept their foot on the pedal as they chalked up 16 and 11 points, respectively, in the final quarter to completely bury the Titans, who seemed to have lost hope as the final seconds ticked away.

Go for Gold head coach Charles Tiu was dismayed with the level of play the Titans displayed.

“Honestly this game, you can tell from the moment it started – I don’t even know if AMA cared for this game, parang walang ka-effort effort (it is as if they were not exerting any effort),” he said.

“It’s mind-boggling and to me it’s like a joke basically, but I think the last two games were probably a wake-up call for them.”

Andre Paras tried to lift the Titans with a double-double of 23 points and 14 rebounds, but his numbers weren’t enough to prevent the squad from going winless in 7 games.