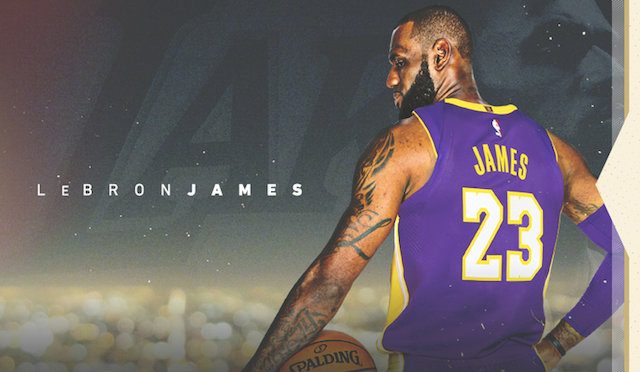 MANILA, Philippines – It’s a big day for the Los Angeles Lakers as LeBron James signed his 4-year $154-million contract  with the purple and gold.

“Today is a great day for the Lakers organization and Lakers fans all over the world to welcome LeBron James, a 3-time NBA Champion and 4-time NBA MVP,” said Lakers President of Basketball Operations Earvin “Magic” Johnson.

“LeBron is special. He is the best player in the world. He loves to compete and is an awesome leader who is about winning and making sure that his teammates are successful. The Lakers players are excited to have a teammate who has been to 9 NBA Finals. It’s a huge step closer to returning the Lakers to the playoffs and to the NBA Finals,” Johnson added.

James will continue donning the number 23 for the Lakers.

“This is a historic moment for the Lakers, and we could not feel more grateful and honored,”Lakers General Manager Rob Pelinka said.

“When LeBron James – a perennial NBA MVP and champion who is playing at the most astonishing levels of his career – chooses to join the Lakers, it serves as the ultimate validation for what we are building here.”

“However, we all know that the work is not yet done. We will continue forward and do all that is necessary to achieve our shared obsession of bringing banner No. 17 to the world’s best fans – Lakers Nation,” Pelinka added.

Last season, James averaged 27.5 points, 9.1 assists and 8.6 rebounds and led the Cleveland Cavaliers to their 4th straight finals appearance since his return in 2014. – Rappler.com