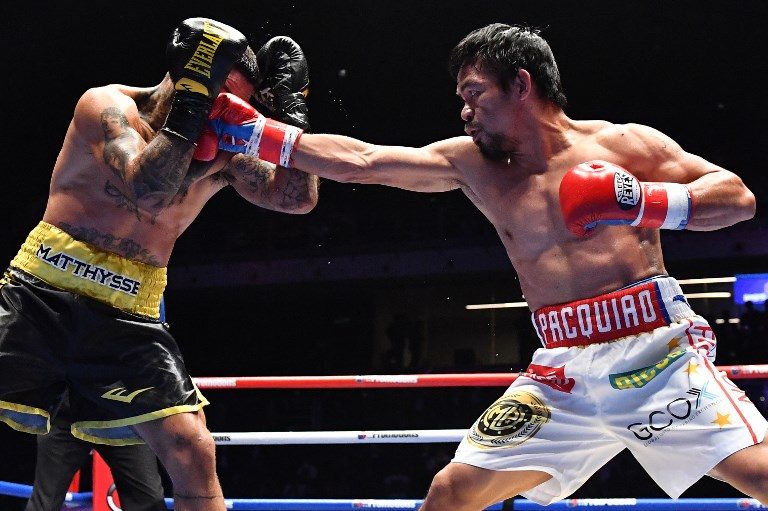 Although called on by friends, family and critics to hang up the gloves, the 39-year-old proved he can still pack a punch by defeating the Argentine via a 7th-round technical knockout win at the Axiata Arena in Kuala Lumpur, Malaysia on Sunday, July 15.

Pacquiao, despite being 4 years older than his foe, displayed the speed and power that made him boxing’s only 8-weight division champion by knocking down Matthysse thrice before referee Kenny Bayless stopped the bout.

Matthysse fell down in the 3rd and 5th rounds before spitting his mouth guard in the 7th round after another knockdown, forcing Bayless to interfere and giving Pacquiao his first stoppage win since his TKO triumph of Miguel Cotto in 2009.

“I’m surprised I knocked him down so early,” said Pacquiao, who ended his 9-year knockout drought. “It was a long time ago since I’ve done that. I came out smoking hot.

“We did a good job in training. We were not pushing hard – we controlled our pace and ourselves.

“I’m no longer young so thanks to my trainer and all my team members.”

“Pacman” returned to the winning track following a shock points loss to Australian Jeff Horn in 2017, when he lost his World Boxing Organization (WBO) welterweight belt.

The Filipino boxing legend has now become a 5-time welterweight champion and hiked his number of victories to 60 (39 knockouts) against 7 losses and two draws.

Matthysse, meanwhile, suffered his first defeat since 2015 and failed to defend the WBA belt he won last January following an 8th-round KO of Thailand’s Tewa Kiram. His win-loss record dropped to 39-5 (36 KOs). – with a report from Agence France-Presse