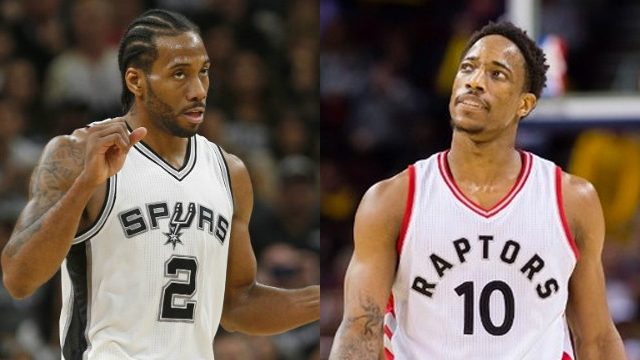 MANILA, Philippines – Swirling speculations on where Kawhi Leonard will play next may have already been put to rest as he heads to the Toronto Raptors.

According to ESPN’s Adrian Wojnarowski, the San Antonio Spurs have agreed to trade Leonard and Danny Green to the Raptors for DeMar DeRozan, Jakob Poeltl and a protected 2019 first-round pick.

With Leonard, the Raptors acquire a two-way player who has proven he can win on the big stage.

Leonard is a two-time NBA Defensive Player of the Year and the Finals Most Valuable Player when the Spurs won the championship in 2014. He averaged 16.3 points, 6.2 rebounds and 1.8 steals in his 7-year stint in San Antonio.

Add Green, a career 39.5% from beyond the arc, and Toronto will be able to spread the floor with one of the league’s most known 3-and-D studs.

The Spurs, meanwhile, will not be short of offense with the arrival of DeRozan, who averaged 19.7 points, 4.1 rebounds, 3.1 assists and 1.0 steals in 9 years with the Raptors.

Together with backcourt partner Kyle Lowry, the 4-time All-Star led the Raptors to the top spot of the Eastern Conference last season before getting swept by the Cleveland Cavaliers in the conference semifinals.

Poeltl, meanwhile, is a 22-year-old center who had shown promise in his two years in Toronto. He averaged 6.9 points, 4.8 rebounds and 1.2 blocks after playing in all 82 games last season.

But things are still complicated as ESPN’s Chris Haynes tweeted that Toronto is not necessarily where Leonard, who was expected to return to his hometown Los Angeles and play for the Lakers, wants to be.

Kawhi Leonard has no desire to play in Toronto, league source tells ESPN.

“Be told one thing and the outcome another. Can’t trust them. Ain’t no loyalty in this game. Sell you out quick for a little bit of nothing,” he wrote.