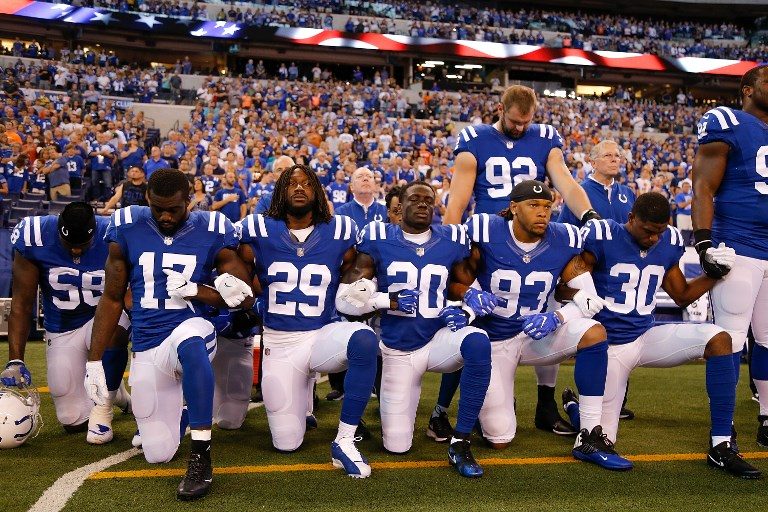 MIAMI, United States – US President Donald Trump again goaded the NFL over its handling of controversial national anthem protests on Friday, July 20, a day after the league said it would hold off on enforcing a new policy.

Protests in which players kneeled during the anthem – first launched by San Francisco 49ers quarterback Colin Kaepernick in 2016 to highlight racial and social injustices – put America’s most popular sport at the center of a political firestorm last year.

This came after Trump described players who took part as “sons of bitches” who were insulting the flag, the US military and the nation.

The remarks prompted a wave of kneeling protests across the league last September, angering some fans and placing several conservative, Trump-supporting team owners in an awkward position as NFL television ratings dropped.

In a bid to steer away from controversy in the upcoming season, NFL commissioner Roger Goodell announced in May that owners had agreed on a new policy requiring all players and team and league personnel on the sidelines to “stand and show respect for the flag and anthem” although it gave players the option of staying in the locker room instead.

Contrary to Trump’s tweet, there is nothing in the NFL collective bargaining agreement requiring players to stand. The league planned to fine teams if players violated the new policy, and teams could decide whether to penalize players.

The NFL Players’ Association filed a grievance, arguing the new rule was “inconsistent with the collective bargaining agreement and infringes on player rights.”

The league and union agreed to confidential talks to try to resolve the issue, and issued a joint statement on Thursday night announcing a “standstill agreement” on the matter.

“No new rules relating to the anthem will be issued or enforced for the next several weeks while these confidential discussions are ongoing,” the league and union said.

That announcement came hours after a leaked report of the Miami Dolphins conduct policy for the upcoming season said anthem protests were listed as “conduct detrimental to the club” punishable by fines or suspensions.

Dolphins owner Stephen Ross insisted Friday that the team had no plan in place to suspend players who protested during the anthem.

Ross said that the “one line sentence” on the anthem policy “was a placeholder” because the NFL required the team’s disciplinary policy at the start of training camp.

He said the Dolphins “haven’t made a decision on what we would do, if anything” if players on the sidelines declined to stand for the anthem.

‘No understanding’ of issue

He also criticized Trump’s comments on the issue.

“He has no understanding of why they take a knee or why they’re protesting,” Tisch said. “When the new season starts, I hope his priorities are not criticizing the NFL and telling owners what to do and what not to do.”

But Trump’s latest tweet piles more pressure on the league and union to come up with a coherent policy acceptable to both.

The Dolphins were just one of the teams to open rookie training camp this week, and all 32 teams will have opened their full training camps by Friday July 27.

The pre-season kicks off on August 2 with the Hall of Fame Game between the Baltimore Ravens and Chicago Bears and the regular season begins on September 6 when the Super Bowl champion Philadelphia Eagles take on the Atlanta Falcons. – Rappler.com