Hair to the throne? Arsenal’s Guendouzi compared to Vieira 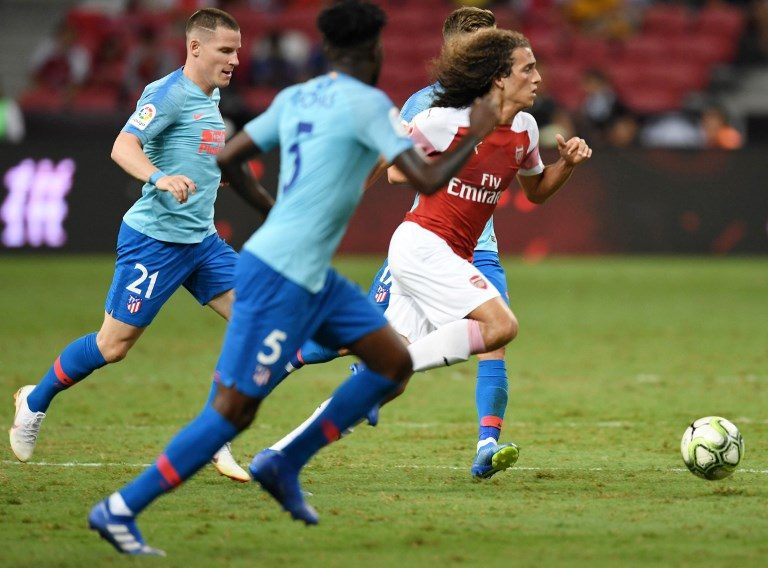 SINGAPORE – French whizz Matteo Guendouzi said he hopes he’s embarking on a “big adventure” with Arsenal after a scintillating start which has drawn comparisons with the great Patrick Vieira.

The 19-year-old midfielder, instantly recognizable by his long hair, had fans salivating in friendlies against Atletico Madrid and Paris Saint-Germain in Singapore.

Guendouzi, a strong tackler with confident distribution, was a dynamo at the base of midfield, where against PSG he played alongside the similarly hirsute Mohamed Elneny.

Arsenal have long missed a midfielder of the stature of Vieira, a member of the “Invincibles” side, which went through the 2003/2004 Premier League season unbeaten.

With only 3 appearances so far – also including this month’s outing against Boreham Wood – it’s early days for Guendouzi, an under-20 international signed from Lorient.

But he said there was a positive feeling at Arsenal as the London club opens a new era under Unai Emery, following Arsene Wenger’s 22-year reign.

“I’m very happy about how the team played,” he told AFP, after Arsenal’s 5-1 demolition of a youthful PSG side at the International Champions Cup in Singapore.

“It gives us confidence and it really made things easy for me. With such a good team and a good feeling around the team, I think we can really do some good things here.”

Arsenal is traditionally one of England’s biggest clubs but Guendouzi’s arrival is well timed as Emery rebuilds a team which finished only 6th in the Premier League last season.

However, Emery has plenty of midfielders to choose from, including Uruguay international Lucas Torreira, another new signing, and Switzerland’s Granit Xhaka.

Guendouzi said he hopes to get his chance in competitive games but that he also wants to learn from teammates such as Henrikh Mkhitaryan, Mesut Ozil and Aaron Ramsey.

Arsenal complete their preseason against Chelsea and Lazio before a tough start to the season when they play champions Manchester City and Chelsea in their first two games.

But they have the advantage of working with a nearly full-strength squad as many of their rivals await the return of players after the World Cup.

Emery has been drilling his players hard and his tactical changes have already been in evidence with a high-pressing, possession game with plenty of attacking threat.

“It’s a great atmosphere. It’s a great environment to work in, we’re working really well in training and we’re playing well in the matches,” Guendouzi said.

“But it’s only the start,” he added. “Hopefully this will be a big adventure with Arsenal.

“These are only friendly matches so I need to keep working – that’s the most important thing for the future I hope to have at Arsenal.” – Rappler.com