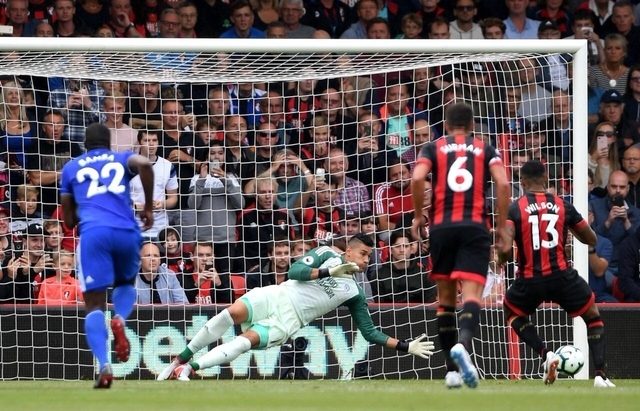 Facebook Twitter Copy URL
Copied
There is plenty to note about the Azkal's EPL debut, but mostly the self-belief that got him here

MANILA, Philippines – “I believe I can play at the highest level.”

Neil told me those words over the phone years ago, maybe 2014 or 2015, when we had a phone interview. He could have been with Charlton Athletic, or maybe Crewe Alexandra, or perhaps Walsall. In other words, he was treading water in his career, toiling in the English lower leagues waiting for another shot at glory.

That statement was in response to a suggestion that he might wish to play in Asia. After all he did impress in Uzbekistan in World Cup qualifying in an Azkals loss there. For sure Asian clubs were eyeing him. A European-trained keeper filling an Asian player slot would be appealing to a lot of AFC Cup or even AFC Champions League sides. But Neil would have none of it. He wanted to stick it out in England and pursue a Premiership dream.

Etheridge, now 28, played for Fulham from 2008 to 2014. Aussie goalkeeping legend Mark Schwarzer stood in his way for much of that time, as did David Stockdale. Etheridge made the substitute’s bench for Fulham, but never crossed the white line into the park, neither as a starter nor a sub in the Premier League. He did, however, start in one Europa League match.

Fulham went into a tailspin after that, and Neil departed. He bounced around the third tier of English football, enjoying a good two-year spell in Walsall before the call up to the Welsh Capital last year. Nineteen clean sheets later, Cardiff City was back in the top tier, having gained automatic promotion by finishing second in the second-tier Championship to Wolverhampton Wanderers.

Neil never lost faith in himself, despite the ups and downs of his career, well-chronicled here.

Cardiff shows their confidence in the Azkal

But truth be told, even his start on Saturday, August 11, was an accomplishment. While he helped lead the team to the Promised Land, there was no guarantee he would remain between the sticks.

A source who has been involved with English football and knows Cardiff coach Neil Warnock told me in the off-season that Etheridge would be an unlikely starter for Cardiff in the EPL. Many promoted clubs hope to strengthen the squad when they take the step up. They need upgrades at many positions, and goalkeeper is often one of them. Three teams were relegated from the English top tier last year. Any of the goalies from those teams would be more experienced at this level than Etheridge.

“Warnock may see there is a keeper with 200 Premier League starts who is available,” said the source.

If that happened, then Etheridge might have been shipped off to an ambitious Championship club in need of a keeper.

But instead, among the Cardiff off-season signings was Alex Smithies. The former Queens Park Rangers keeper is the same age as Neil, and has more than a 100 appearances for the Eagles in the Championship. That makes him at a very similar level to Neil. Smithies will push Neil in training and Warnock knows he has a capable back up.

But the mere fact that Warnock did not grab a more experienced keeper spoke volumes. It meant he believed in his namesake and felt the club’s transfer war chest was better spent elsewhere. It was the best vote of confidence Neil could get from the Welsh club.

A debut to remember, but challenges await.

Etheridge’s side lost 2-0 to Bournemouth on Saturday. The Cherries can hardly be described as a Premier League powerhouse, having been in the Premier League only since 2015. But Eddie Howe’s side gave them a jarring introduction to Premiership football at the Vitality Stadium, the Bournemouth home ground.

“Every team in the Premiership will be quicker and stronger (than in the Championship),” said Neil over WhatsApp on Sunday night, August 12.

“It’s the Premier League and the best league in the world. Passes that you don’t expect will happen. So you just need to expect the unexpected.”

What was also unexpected was his terrific penalty save on Callum Wilson in the first half. Etheridge read Wilson like a book and dove quickly to his left, swatting the ball away at full stretch. (LOOK: Neil Etheridge makes 1st Premier League season penalty save)

“I went the right way and I got a good strong hand to it,” recalled Etheridge.

“Crucial time of the game to keep the score line down,” he added. The Cherries led 1-0 at that point.

Neither of the Bournemouth strikes were Etheridge’s fault, and he can hold his head up high despite the loss.

But no doubt there will be more tough games like this. Newly promoted sides tend to struggle in the Premiership. Cardiff will do well to avoid becoming an “elevator club,” a team that toggles up and down between tiers. No doubt Cardiff’s first order of business is to stay up. The financial rewards of being in the Premier League are massive, so the pressure is on. And Neil will be in the crosshairs of opposing strikers, week-in, week-out. He is going to get plenty of work.

What the future holds.

Neil’s presence in the Premier League will be beneficial for football in the Philippines. There is some good news for the game, as new pitches continue to sprout up and youth competitions, at least in the capital, are growing. But our age group national teams continue to receive hidings in international play, (with the exception of the U19s who at least beat Singapore,) and the PFL faces challenges in its second season.

A Pinoy in the world’s most popular league will no doubt help boost the standing of the game here. Plus, ABS-CBN Sports is once again showing selected European club football games on free TV in partnership with BeIn Sports. S+A did not air the Cardiff City-Bournemouth match but one imagines that they will get around to showing a Cardiff game sooner than later. The combination of these factors could help nudge football back in the limelight.

Neil’s Azkals future might be a bit cloudy in the near term. It’s not clear if he will play in this year’s AFF Suzuki Cup. Only the first two matches, against Singapore and either Timor Leste or Brunei in November, are within the FIFA International window for that month. The next two games, much tougher ones against Indonesia and Thailand, fall after the window, so Neil cannot suit up.

One wonders if the next Azkals coach will want him here for two games, one very winnable, then see him leave before the tougher matches. The number one jersey for the Suzuki will probably be contested by Davao keeper Patrick Deyto or Bangkok United’s Michael Falkesgaard. Should Roland Müller, now back in Ceres, get some action in the upcoming PFL Cup and unretire from international play, he too could be in the equation.

Premier League sides often allow Asian players to play in the AFC Asian Cup and African Cup of Nations, both held early in the calendar year outside FIFA dates. So let’s see if we will see Etheridge in the UAE next January. Chances are likely going to be better for that competition. It will be the first time for the Philippines in that tournament, and we will need good goalkeeping, with group matches against South Korea, China, and Kyrgyzstan scheduled for early January.

But Etheridge’s focus is on Cardiff. He needs to be in form to push the Bluebirds in what promises to be a challenging 38-match season. An entire nation is behind him. Can he rise up to the occasion once again?