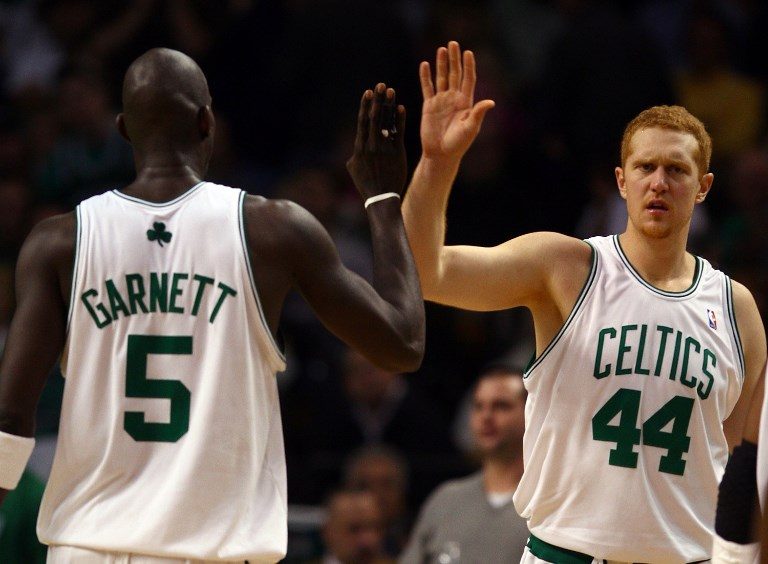 MANILA, Philippines – Former NBA champion and internet sensation Brian Scalabrine is in the country for the NBA 3X event this weekend, and he wasted no time talking about 3-on-3 basketball and his love for his former team, the Boston  Celtics.

“I just landed and I just came here, but the anticipation to come was awesome because about three weeks ago I found out I was coming,” Scalabrine said in a recent sit-down interview in Taguig.

“I started telling a few of my friends. I’ve heard about the love for basketball out here in the Philippines. I love the game of basketball and I’m excited just seeing what type of play, what type of style these young kids play with.”

“I hear there’s a celebrity 3-on-3 game as well so, I’m trying to get in on that,” he continued. “So I’m excited about just my whole trip in general.”

Asked on who would he team up with from any of the past or present Celtics team, “The White Mamba” clearly had a hard time in answering.

“Oh, no [Kevin] Garnett! Can I just cut myself and pick Bill Russell, Larry Bird, Kevin Garnett and Paul Pierce? I’m cutting myself. I’m not leaving Garnett off the team and putting me on the team. I’m not doing it,” he said amid shared laughter with reporters.

Moving from fantasy Celtics scenarios to reality, Scalabrine gave his predictions on who would face off in the NBA Finals and how it would go down.

“Even though LeBron [James] was in Cleveland, the Celtics would still be the favorites to go to the finals, just to be clear on that,” he butted in mid-question.

“They have a lot more defenders – bodies they can throw at Curry and Thompson,” he explained. “They have much more length to guard a guy like Kevin Durant. But at the end of the day, the Warriors are one of the greatest teams ever assembled. It’s gonna be hard to beat them.”

“Celtics have had pretty good success against the Warriors in the last three years but at the end of the day, it’s not gonna be easy with Kevin Durant playing that well,” he continued.

“I don’t know if you guys saw Game 3 [of the previous Finals] where Steph and Klay could not make a shot but Durant had 40. So how do you beat that team? I do think the Celtics will go to the Finals but probably at this point they’ll lose in six [games].”

Scalabrine rose to internet superstardom once the former role player became the butt of internet memes, with some calling him the greatest of all time and other unrealistic descriptions compared to his on-court performances.

This alternate-reality distinction got so popular that he was nicknamed “The White Mamba,” a clear nod to five-time champ Kobe “The Black Mamba” Bryant.

The NBA even acknowledged the memes and made a video of his top ten plays, which is only usually reserved for players of star-level talent.

Scalabrine finished his career with averages of 3.1 points and 2 rebounds a game. He now works as a TV analyst and co-host of “The Starting Lineup” radio show. – Rappler.com