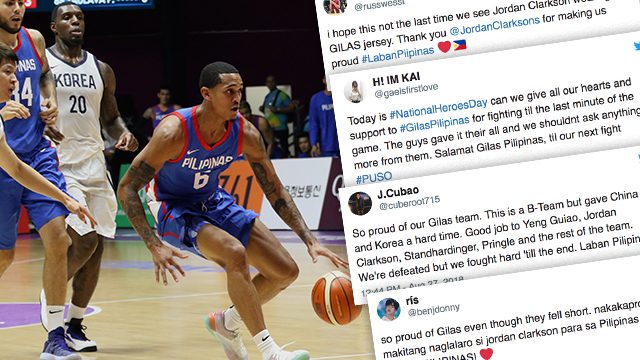 Twitter users took to social media to share their gratitude to Gilas Pilipinas for a gallant stand against Asia’s best basketball teams.

Today is #NationalHeroesDay can we give all our hearts and support to #GilasPilipinas for fighting til the last minute of the game. The guys gave it their all and we shouldnt ask anything more from them. Salamat Gilas Pilipinas, til our next fight #PUSO pic.twitter.com/ZwZTg08zbo

So proud of our Gilas team. This is a B-Team but gave China and Korea a hard time. Good job to Yeng Guiao, Jordan Clarkson, Standhardinger, Pringle and the rest of the team. We're defeated but we fought hard 'till the end. Laban Pilipinas.

Wait till Romeo Castro Ravena and Clarkson show up.

June Mar and Blatche are perfect for Ratllifte

After the heartbreaking loss that relegated the Philippines to the classification round of the basketball tournament, netizens turned the spotlight to Filipino-American NBA star Jordan Clarkson and thanked him for donning the Philippine colors.

Many were hopeful that this is not the last time they will see Clarkson play for the Philippines in international tournaments.

i hope this not the last time we see Jordan Clarkson wearing the GILAS jersey. Thank you @JordanClarksons for making us proud #LabanPiipinas

I just hope we'll get to see Jordan Clarkson play in a "Pilipinas" jersey again. Thank you, Gilas. Thank you, Clarkson.

No matter what, i still love this Gilas group. So much respect for them, esp Jordan Clarkson. No superiority complex and playing within Gilas system. Mahal ko na sya #LabanPilipinas #AsianGames2018

LET'S BE HONEST BUT JORDAN CLARKSON IS THE BEST THING THAT HAPPENED IN GILAS DESPITE OF LOSING. HE PROVED WHAT HE'S CAPABLE OF AND ALL WE NEED IS A MUCH STRONGER & BETTER TEAM WITH HIM AND FOR SURE, WE CAN MAKE IT SOON!! THIS IS JUST THE BEGINNING #PUSO #LabanPilipinas

Whatever the result, it was still awesome to see Jordan Clarkson in a Pilipinas jersey. Next wish: To see him play with Junemar!

What I am sad about is knowing that this is a one chance given to Jordan Clarkson to play for the Philippines, but sadly we didn't get to advance for the next round
Hoping to see him play with #Gilas Pilipinas again.

What are your thoughts about the Philippines’ performance in 2018 Asian Games men’s basketball? Let us know in the comments! – Rappler.com