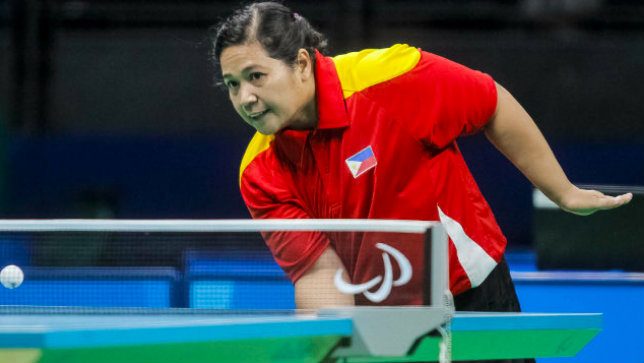 The Filipino Paralympian had a dominant start to her campaign as she swept Thailand’s Kanlaya Kriabklang and China’s Huang Wenjian who settled for a bronze as Medina prevented an all-Chinese table tennis finals.

Medina – who represented the Philippines in the 2012 and 2016 Summer Paralympics – was diagnosed with polio.

The 48-year-old was one of the highly touted Filipino bets to bring home a medal from the continental multi-sport event for para athletes.

Bemedalled para swimmer Ernie Gawilan earned his third medal in the Asian Para Games as he picked up a silver in the men’s 100m freestyle (S7) event.

In the men’s road cycling (C4) event, Godfrey Taberna bagged the bronze after clocking 2 hours, 11 minutes and 24.359 seconds behind silver medalist Najib Mohb of Malaysia who edged the Filipino out by 5 hundreths of a second (2:11:24.307).

China’s Weiguoping ruled the competition by nipping the podium finishers by a second,  timing 2:11:23.665.

Gary Bejino continued to haul medals for the Philippine contingent as he snagged his second bronze medal in the men’s 100m freestyle S6.

The Pinoy Para swimmer clocked 1 minute and 15.32 seconds for the last spot on the podium while China’s Yang Hong settled for a silver (1:14.04) and Kazakhstan’s Salimgereyev Yerzhan reigned supreme (1:12.22).

Philippines now has a total of 10 medals – 2 gold, 4 silver and 4 bronzes – for a 14th place standing in the tournament’s medal tally.

The team has already surpassed its 5 silver and 5 bronze medal haul in 2014 thanks to gold medals by Gawilan’s and Chi Kim Ian. – Rappler.com