Facebook Twitter Copy URL
Copied
'The elbow in the free throw or going after someone's knees, there's no need for that. Be physical and look me in the eye.'

MANILA, Philippines – Following the suspensions handed to big names Arvin Tolentino, Thirdy Ravena and Javi Gomez de Liaño, National University’s Troy Rike hasn’t been happy with the way some players have been getting away with their dirty tactics.

The Filipino-American big man was recently a victim of a dirty play during the Bulldogs’ win  over the University of Santo Tomas (UST) Growling Tigers when he was elbowed at the free throw line and was struck at the knee.

“You can be physical but don’t be sneaky,” said Rike during the post-game press conference.

“The elbow in the free throw or going after someone’s knees, there’s no need for that. Be physical and look me in the eye.”

Off the court, Rike has expressed his dislike for unnecessary physical actions when a video of Adamson’s Simon Camacho landing a body punch on Tolentino circulated online.

“Can we please just play basketball and get rid of this extra stuff. It happens every game and it doesn’t give you an advantage. This isn’t toughness, it’s just dirty and embarrassing,” wrote the frustrated Rike in a quote tweet of the video. The tweet has since been deleted, it elicited a Twitter conversation with Adamson captain Sean Manganti who came to Camacho’s defense.

Based on the conversation, Camacho was “retaliating” to Tolentino who was eventually slapped with multiple game suspensions. 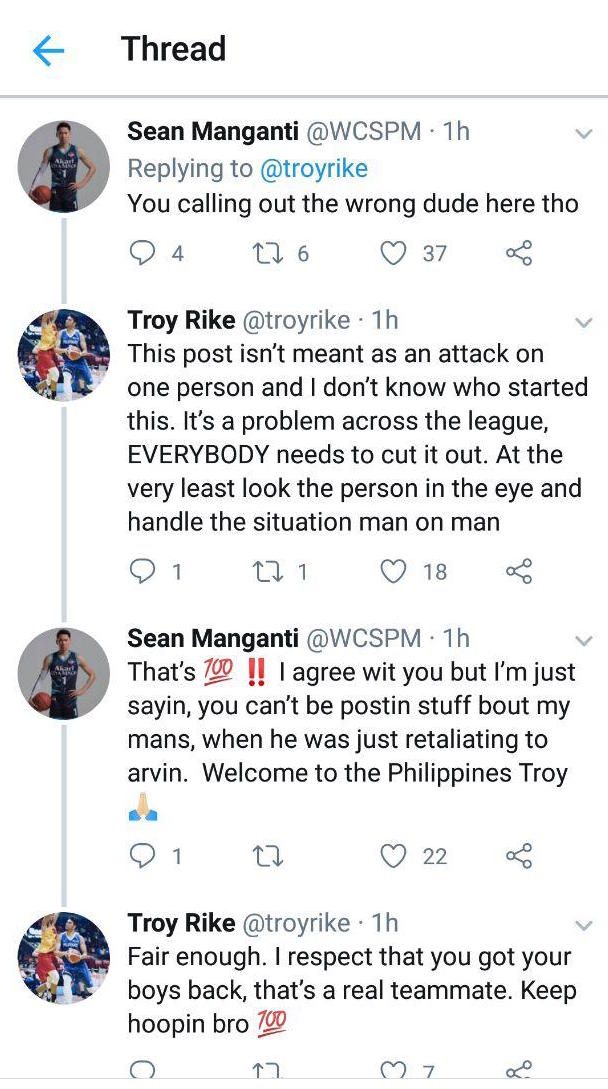 The Wakeforest University graduate admitted that he accepts the physicality of Philippine basketball especially going up against veteran Gilas players like Japeth Aguilar and June Mar Fajardo during practices. (WATCH: ATHLETE’S CORNER Troy Rike steps up)

But with the strict enforcement of penalties in the UAAP lately, Rike hopes that it will help put a stop to the “little ticky tacky stuff” that is plaguing Philippine basketball. – Rappler.com