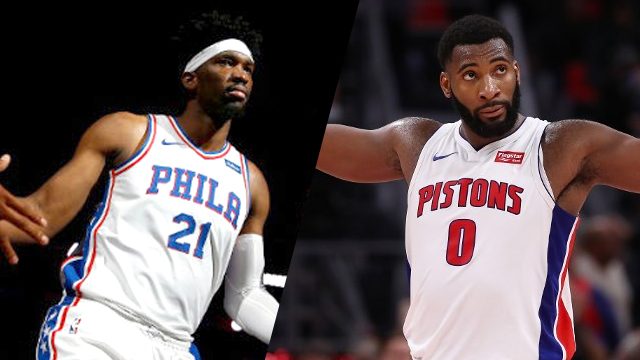 Drummond called Embiid an “Emmy Award-winning actor” after he was ejected in the 4th quarter of the Pistons’ thrilling 133-132 overtime win over the 76ers on Wednesday, October 24, no thanks to Embiid’s apparent flop.

Embiid told reporters after the game that he feels “like I own a lot of real estate” in Drummond’s head and the Detroit center took to Twitter to respond to the Philadelphia star.

“LOL does he? If that’s so, he wouldn’t be so excited to have me off the floor? Think about it, that’s a silly statement! I’ll take the W though. Enjoy [your] flight home #Emmyaward winning actor,” Drummond wrote.

Lol does he? If that’s so he wouldn’t be so excited to have me off the floor? Think about it that’s a silly statement ! I’ll take the W though enjoy flight home #Emmyaward winning actor

The two big men went back-and-forth at each other with Embiid dropping 33 points, 11 rebounds and 7 assists and Drummond finishing with 14 points, 16 rebounds, 3 steals and 2 blocks in their intense duel.

But their battle was cut short with 42.8 seconds left in the 4th quarter when Drummond was called for his second technical foul and tossed out after an apparent flop by Embiid.

In celebration, Embiid clapped and shouted “get him out of here!”

Despite losing their All-Star center, the Pistons still pulled off the victory behind Blake Griffin’s 50-point, 14-rebound and 6-assist showing to remain perfect at 3-0. (READ: Griffin half-century powers unbeaten Pistons past Sixers)