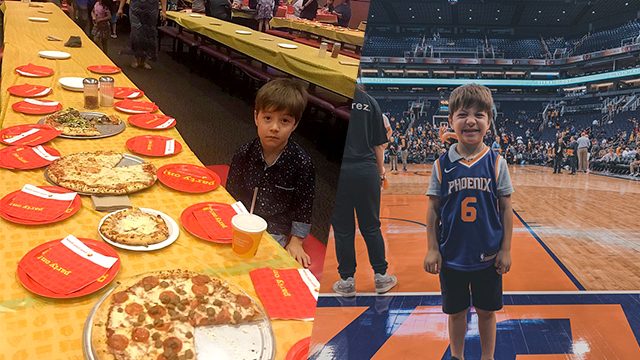 MANILA, Philippines – It was a complete turnaround for the boy from Tucson, Arizona who had no one show up for his sixth birthday.

Teddy Mazzini was given the royal treatment by NBA team Phoenix Suns after he celebrated his birthday by his lonesome when his invited kindergarten classmates did not attend his pizza party.

Mazzini watched the Suns face the Los Angeles Lakers and LeBron James at the Talking Stick Resort Arena on Thursday, October 25, and he was gifted his own Phoenix jersey with “Teddy” written in the back.

TEDDY IS IN THE BUILDING!  pic.twitter.com/jiht7INcgU

Mazzini went viral after his mother, Sil, posted his photo on Facebook showing him sitting alone in his own pizza party since his friends and their parents were no-shows.

Birthday greetings poured in for Mazzini, and the Suns showed their love for him by inviting him to a home game against the Lakers.

How about we celebrate with thousands at our place! Tickets to Wednesday’s #SunsVSLakers game are all yours Teddy! Talk soon! https://t.co/YL3zjDX9JW

Bless Up! Happy Birthday again to the young king Teddy  from the Khaled Family, @asahdkhaled and the #WeTheBestFoundation! And bless up to the young world! Don’t forget! You’re the future! You can accomplish anything!