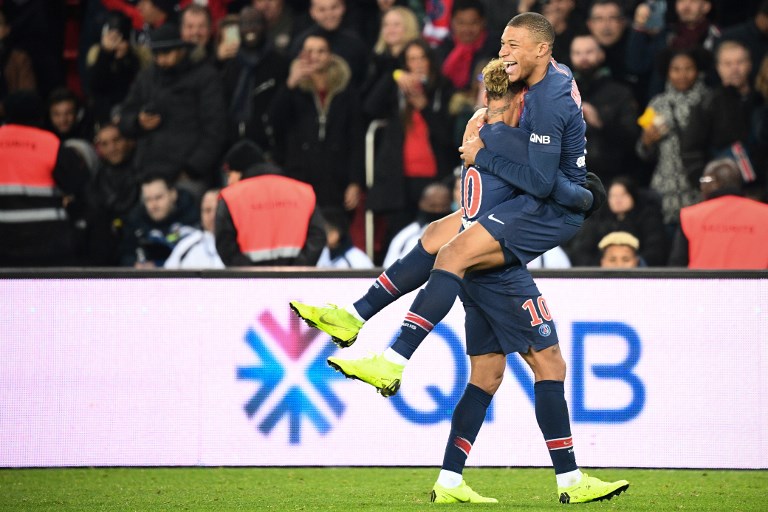 PARIS, France – Kylian Mbappe and Neymar scored late goals to give Paris Saint-Germain a 2-1 win over nearest challengers Lille on Friday, November 2, as the French champions extended to 12 games their perfect start to the season at the end of a troubled day for the club.

The Qatari-owned club were forced to release a statement shortly before kick-off to deny allegations made by a Football Leaks investigation that they had worked with UEFA to cover up breaches of their Financial Fair Play (FFP) rules.

However, Mbappe restored smiles at the Parc des Princes with a magnificent strike from just outside the box 20 minutes from time, and Neymar gave PSG a two-goal buffer before Nicolas Pepe pulled one back for the away side from the penalty spot.

PSG extend its lead at the top of Ligue 1 to 11 points after a 12th straight league win that means they have now beaten Tottenham Hotspur’s old record for consecutive wins at the start of a season.

Spurs emerged victorious from their opening 11 matches in their double-winning 1960-61 season, a performance that had stood since as a record in Europe’s so-called big 5 leagues – Spain, England, Italy, Germany and France.

The result is a boost for PSG ahead of their crucial Champions League trip to Italy to face Napoli next Tuesday, when a defeat could leave Thomas Tuchel’s side on the brink of an early exit.

“We deserved the result and the win record. Ligue 1 is not that easy. It is down to our hard work. We give everything on the field,” skipper Thiago Silva told Canal Plus.

Mbappe was back in the PSG starting lineup after being left on the bench against Marseille last weekend for arriving late for the pre-game team talk, only to come on and score the opener in a 2-0 win.

Marco Verratti also started, despite PSG confirming earlier on Friday that the Italian had been caught drunk driving overnight Tuesday to Wednesday on the ring road around the French capital.

“He told me before training on Wednesday. It was on Tuesday night, it is not possible to do that two days before a match. It is not good what he did but it is something for the club to sort out,” Tuchel said, adding that Verratti was “lucky” the incident did not happen closer to the game.

PSG needed to put the off-field noise behind them but also try to break down a Lille side enjoying their best start to a season in 66 years.

Christophe Galtier’s side has been excellent in this campaign, but their lively attack did not give Gianluigi Buffon much to worry about on his return to the PSG line-up.

With Edinson Cavani not involved as he struggles to shake off a thigh injury, Mbappe and Neymar were the biggest threats to Lille throughout, after arriving at the stadium disguised as characters from the Netflix show Money Heist.

Neymar almost scored direct from a corner 5 minutes before halftime, with Lille goalkeeper Mike Maignan doing well to get his body in the way of the ball and divert it onto the woodwork.

Mbappe had a shot deflected just wide as PSG stepped up the pressure after the break, and it was the 19-year-old who broke the deadlock in the 70th minute, beating Maignan after Neymar’s pass was kindly deflected into his path by Jose Fonte.

That was his 11th goal in 8 Ligue 1 games since winning the World Cup with France, and Neymar then got his ninth in the league this season to seal the win.

The Brazilian played a one-two with Mbappe before firing home from 18 yards with 6 minutes left, before Lille reduced the arrears in stoppage time, Pepe converting a penalty awarded for a Thilo Kehrer handball.

Montpellier can leapfrog Lille and go second if they beat Marseille on Sunday. – Rappler.com