Nov 6, 2018 6:12 PM PHT
JR Isaga
Facebook Twitter Copy URL
Copied
(UPDATED) The San Beda Red Lions can wrap up their 5th title three-peat in Game 2, but then they have to contend with the Lyceum Pirates returning top gun CJ Perez 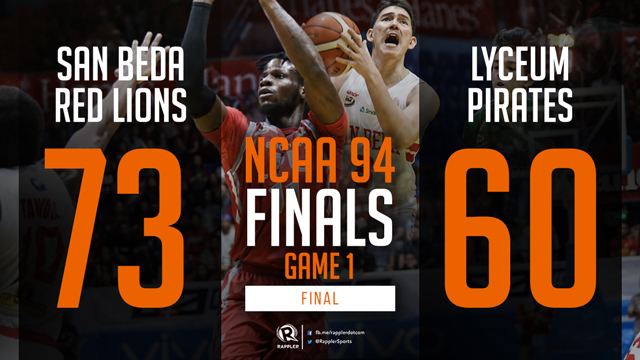 MANILA, Philippines (UPDATED) – With the Lyceum Pirates missing their main star CJ Perez to suspension, the San Beda Red Lions scored first blood in the NCAA Season 94 men’s basketball Finals off a 73-60 rout at the Mall of Asia Arena on Tuesday, November 6.

The famed Red Lions dynasty is now one win away from its 5th title three-peat in school history. Meanwhile, the Pirates can still save themselves from a second-straight Finals sweep once Perez returns for Game 2.

San Beda took advantage of Perez’s absence early on in the ball game, clinching a 20-point lead, 31-11, off back-to-back threes by Clint Doliguez.

Lyceum made small runs here and there but the fully-loaded Red Lions were just too much for them.

Lyceum’s 60-point output is its lowest production for the season so far, edging their 68-point effort in the regular season, also in a loss against San Beda.

Javee Mocon led the balanced Bedan charge with 14 points and 10 rebounds for the double-double. Robert Bolick followed up with 12 markers and 9 assists while Clint Doliguez led the Red Lion bench with 11 points.