LA Tenorio: This is the best Philippine team pool

Nov 7, 2018 12:37 PM PHT
Beatrice Go
Facebook Twitter Copy URL
Copied
'I think this lineup is very versatile. We can play small and quick, we can play big,' says Tenorio, who was surprised to get a national team call-up 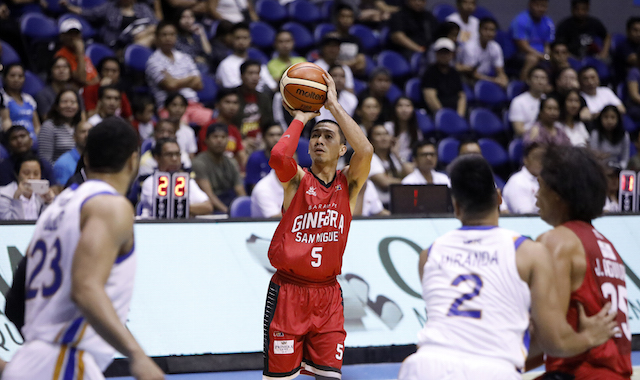 MANILA, Philippines – Gilas veteran LA Tenorio was surprised to find his name in coach Yeng Guiao’s 20-man training pool, but he’s even more excited to train with the “best Philippine team” that’s set to compete in the 5th window of the FIBA World Cup Asian Qualifiers.

Even minus naturalized player Andray Blatche, Tenorio strongly believes in the capabilities of the local stars as Gilas Pilipinas battles Kazakhstan on November 30 and Iran on December 3.

“I think this is the best Philippine team pool that we have seen. Again, I’m very blessed to be part of this lineup. If I’m gonna make it in the final 12, I’ll be really excited to play with them because the team is strong,” said Tenorio.

Guiao decided to leave out Blatche despite the big man’s availabitly for the Iran game on December 3. (READ: Yeng Guiao ‘experimenting’ without Blatche)

The 34-year-old point guard also noted that experience won’t be a problem for the national team as older players like Arwind Santos, 37, will be contributing veteran skills to the team.

After years of experience, Tenorio admitted that he’s also looking forward to train under Guiao for the first time in his basketball career.

(I think I’ve played under all the other coaches except coach Yeng, so I’m really looking forward to it, I’m very excited to play under coach Yeng. It’s a privilege playing under him.)

Tenorio, though, will have to juggle his commitments to Barangay Ginebra – which is set to clash with the Magnolia Hotshots in a Manila Clasico semis duel – and the national team as Gilas training starts on Monday, November 12.

The veteran playmaker last suited up for the national team in the 2014 Seville World Cup, as he begged off from being included in the Philippine team the following year due to fatigue. – Rappler.com