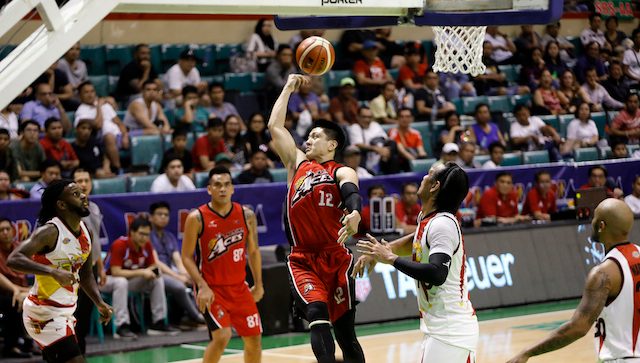 MANILA, Philippines – Jeron Teng was pivotal in his team’s revenge game  against San Miguel in the 2018 PBA Governors’ Cup quarterfinals, but the Alaska Aces rookie believes that the team still needs to do more to crash into the finals.

“We’re happy but we’re still not contented [with eliminating San Miguel]. We still have a long way to go, we’re just waiting for the semis and we wanna achieve more from this point so we’ll continue to practice hard,” said Teng.

The former La Salle standout showed no signs of fear against the veteran-laden San Miguel team and was the fourth Alaska player to tally double digits as he chipped in 10 points, 5 boards and 3 assists in 22 minutes of play.

“Coming into this game, we just wanted to give our best. We have a great opportunity to beat San Miguel and enter the semis so we took advantage of the situation and I just wanted to play my best,” added Teng.

The Alaska Aces finished 3rd in the eliminations that merited them a twice-to-beat advantage in the quarterfinals against the sixth-seeded San Miguel Beermen.

The Beermen had missed the serviced of four-time MVP June Mar Fajardo for most of the conference due to a right shin injury and only saw action last October 27.

The Aces will advance to semifinals against the winner of the do-or-die quarterfinal match between the Phoenix Fuel Masters and the Meralco Bolts.

For now, Teng looks forward to his his second semifinals PBA stint and expects the Aces to come out determined to clinch their first title since the 2013 Commissioner’s Cup.

“[I feel] super blessed because entering semis at my rookie year, this is my second time so more opportunities for me to play the game that I love and as a team, we just play together and we’re just trying to prove to everybody that [this team will be ready],” said Teng. – Rappler.com