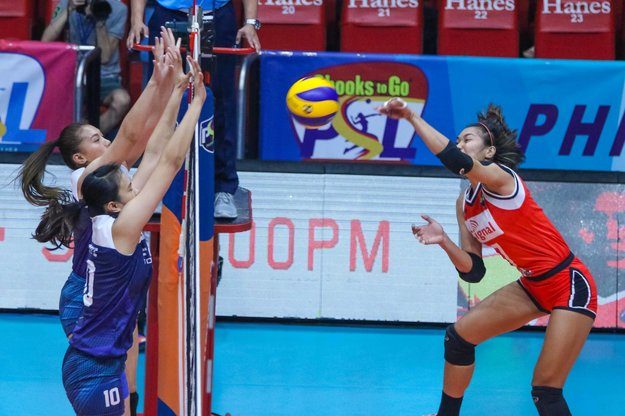 MANILA, Philippines – F2 Logistics and Foton sustained their blazing starts as they clobbered their respective foes in the Philippine Superliga All-Filipino Conference on Thursday, November 8, at the Filoil Flying V Centre in San Juan.

Majoy Baron led the charge with 14 points, including 7 digs, while former Most Valuable Player awardee Ara Galang and Kianna Dy chipped in 12 points apiece for the Cargo Movers, who came up with a fitting follow-up to their impressive win over the HD Spikers in the opener.

“We often start slow, especially whenever we play against opponents who just came from a tough loss,” said de Jesus, noting that they are still searching for their killer instinct.

“We should do away with it because it gives the other team momentum. We have to be at our best from start to finish regardless of whom we are facing.”

Santiago and Manabat opted to see action in the prestigious V.Premier League of Japan.

Foton head coach Aaron Velez stressed that they remain a work in progress.

“I think we were able to get back to our system,” said Velez, who took the helm from John Abella in the off-season.

“We’re still trying to figure out how to be consistent. But, I also think were able to tap our energy and momentum down the stretch.”

Velez said they made some changes in their position to thwart the vaunted defense of the HD Spikers.

“So I thought of a plan in which we can take advantage of our positions and turn the game around. Fortunately, it worked.”  – Rappler.com