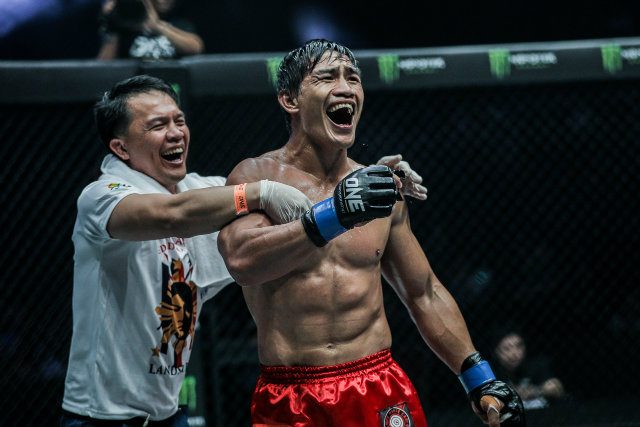 SINGAPORE – The Philippines’ Team Lakay raked in 4 major awards in the 2018 Global Martial Arts Awards to further establish itself as one of the best mixed martial arts stable in Asia.

Eduard Folayang bagged the most prestigious plum in the inaugural awards hosted by ONE Championship after winning the Martial Arts Hero of the Year at the JW Marriot Hotel here on Thursday, November 8.

The 33-year-old surrendered his ONE lightweight belt to Martin Nguyen in November 2017 but posted back-to-back victories earlier in 2018 to set up a bout against Singapore’s Amir Khan with the title on the line.

Team Lakay, which currently has 3 ONE champions, won Gym of the Year while stable head coach Mark Sangiao nabbed Coach of the Year.

Reigning ONE strawweight titlist Joshua Pacio took home the Submission of the Year honors for an innovative arm lock in his victory over Thailand’s Pongsiri Mitsatit in July. He called the move “The Passion Lock.”

Filipino reporters Santino Honasan of ABS-CBN Sports, JM Siasat of GMA News and Mike Murillo of BusinessWorld were nominated for Martial Arts Journalist of the Year, which was won by Manabu Takashima of MMA Planet. – Rappler.com