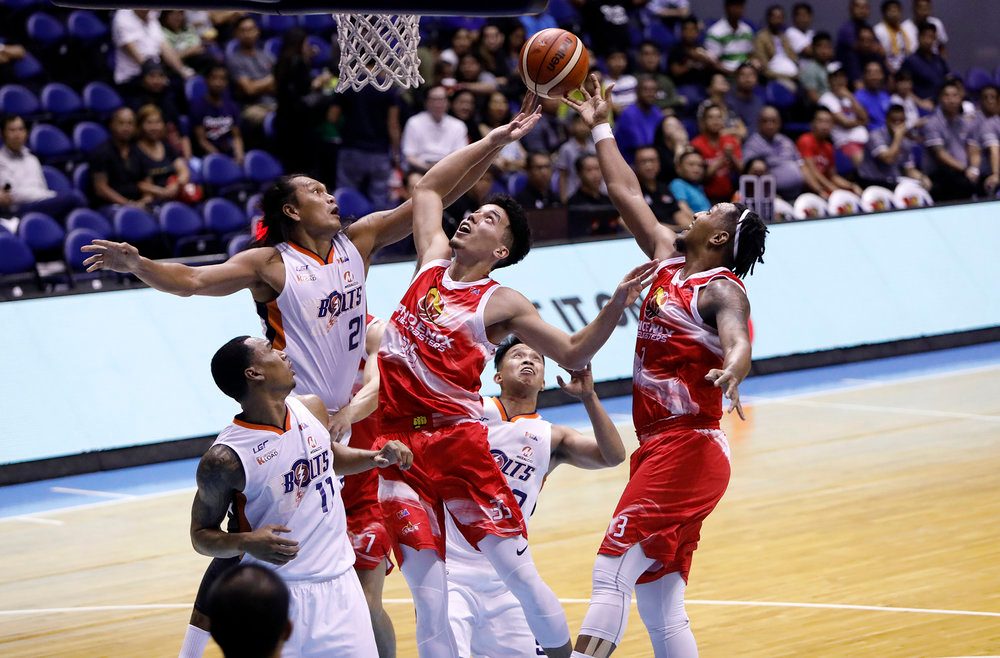 Facebook Twitter Copy URL
Copied
'What a hill that we had to climb to get to this point,' says coach Norman Black after the Bolts overcame the Fuel Masters' twice-to-beat quarterfinal edge

MANILA, Philippines – Both teams clearly wanted it, but in the end, the Meralco Bolts had more firepower left in their tank.

Baser Amer fueled Meralco’s strong surge in overtime as the Bolts completed an upset of the Phoenix Fuel Maters, 108-103, to catch the last train to the 2018 PBA Governors’ Cup semifinals at the Araneta Coliseum on Friday, November 9.

Meralco kicked off the extra period with an 8-0 explosion off back-to-back Amer threes, 102-94, then held off the Fuel Masters’ late run behind Calvin Abueva and Matthew Wright.

The recharged Bolts will now face the third-seeded Alaska Aces in the best-of-five semifinals starting Sunday, November 11, at the Ynares Center in Antipolo, Rizal.

“What a hill that we had to climb to get to this point,” said Meralco coach Norman Black. “Every game for the last 6 was pressure-laden. There was not much room for error both on offense and defense. I’m really happy for the players.”

Durham proved why he’s a two-time Best Import with a near-triple-double of 32 points, 21 rebounds and 9 assists. Amer came through big time with 26 points, 23 coming in the 2nd half and overtime.

Meralco – which trailed by as many as 16 points – looked headed for the win in regulation after Hugnatan calmly sank two penalty shots for a 94-91 lead.

But Phoenix rookie Jason Perkins negated that on the other end with a cold-blooded tying three in the last 7 seconds to force overtime, 94-94.

Amer led the Bolts’ third-quarter fightback, ending the frame with a go-ahead jumper, 70-68, after a Nino Canaleta corner three.

Phoenix then made the necessary stops and distanced themselves off a Perkins three, 85-79, with 6 minutes left in regulation.

Amer, however, led another comeback in the clutch, draining a pull-up trey followed by an and-one floater, 88-91 at the 2:17 mark.