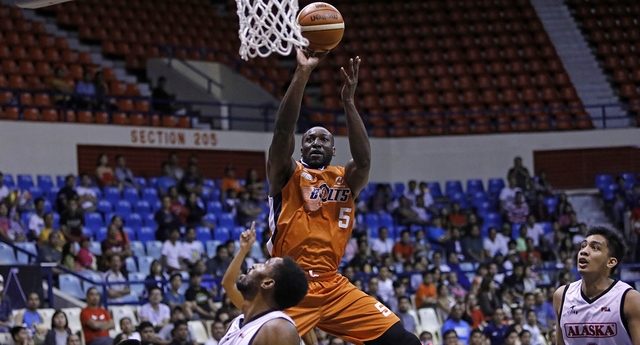 ANTIPOLO CITY, Philippines – Meralco’s resurgence continued as it drew first blood against Alaska, 97-92, in their best-of-five semifinals series of the 2018 PBA Governors’ Cup at the Ynares Center here on Sunday, November 11.

Allen Durham delivered all-around numbers of 32 points, 14 rebounds and 6 assists to electrify the seventh-seeded Bolts to their seventh straight victory – and just two wins away from a third straight finals appearance in the season-ending conference.

Chris Newsome finished with 16 points, 7 rebounds, 4 assists and 4 steals while Baser Amer chipped in 14 points, 4 rebounds and 3 assists in the win that saw Meralco fend off a late scare by Alaska.

The Aces trailed 86-94 with 15 seconds left until they rode on a 6-2 spurt off back-to-back triples from import Mike Harris and Ping Exciminiano to narrow the gap to 4 points.

But with only 3 ticks remaining, the Bolts secured the triumph behind an Amer freebie and gave head coach Norman Black, who will be turning 61 on Monday, an early birthday present.

“I think the last two years, I actually lost on my birthday. So at least this year, I can be happier that we won tonight,” Black told reporters after the win.

Thanks to a blistering first-half performance, Meralco enjoyed a lead as large as 16 points, 47-31, before Alaska clawed its way back into the game.

Harris submitted 37 points, 18 rebounds and 3 steals in the losing effort while Chris Banchero chalked up 16 points, 4 rebounds, 4 assists and 4 steals.

Game 2 is on Tuesday, November 13, at the Mall of Asia Arena.