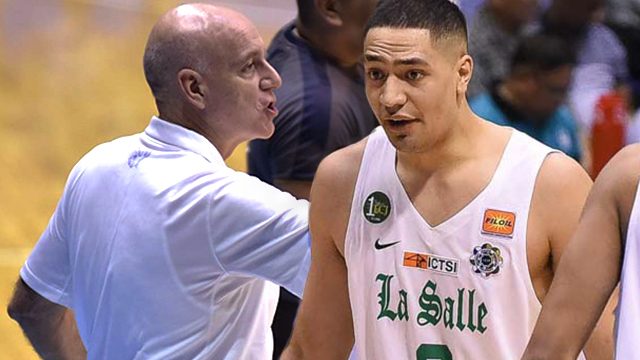 Samuel only had 8 points in 17 minutes, but looked really aggressive in his first game back from a lengthy injury battle and even completed a crossover drive leading to a layup through the tough Ateneo defense.

As such, Baldwin gave his positive assessment for the skilled 6-foot-8 Kiwi big man after the tough UAAP duel won by Ateneo, 71-62, on Sunday, November 11.

“I thought he played a good game,” said Baldwin. “I thought offensively, he presented some problems for our bigs even off the dribble. He made some good moves. But I think defensively, within their schemes, he was trying to catch up a lot. So we targeted him a bit with our ball screens and stuff like that, but I thought he played a really good game. He’s just another weapon for them.”

Indeed, Baldwin’s criticism was consistent with Samuel’s own reflections.

“The speed is a lot faster than I’ve played, especially coming from New Zealand,” Samuel said. “The pace is a lot slower. They try to stay calm with everything. But that’s what I really needed to adjust to since coming out here, just the speed of the game.”

But on the positive end, the 19-year-old bruiser made up for his speed with physical and mental toughness, even bumping and pushing Ateneo players after some plays.

Having coached New Zealand teams from the late 1980s until 2002, Baldwin wasn’t the least bit surprised with how Samuel carried himself.

“In this rivalry, [the Archers] give their all. As far as physicality and toughness in New Zealand, the game is very physical so I don’t think it matters too much,” he said. “I want my team to be physical but it always comes down to having to adjust to the referees and how they’re calling the game. We talk about that a lot, we try to do that and tonight it was difficult, but in the end, we got the win.”

Samuel said his antics were just part of the game.

“It’s nothing. It’s just banter. Just in the game, you know,” he said. “What happens on the court, stays on the court. No hard feelings. I got respect for every player in every team. They’re just doing what they can do to win, just like what we’re doing.”

Right now, Samuel is just hoping that his return didn’t come too late for La Salle.

“It’s gonna be really important. Hopefully I find my groove next game or within the next few trainings,” he said. “These games are really gonna be big for us to get our team chemistry up to the standard we need to be able to compete in the Finals.”

At least after just one full game, he’s already got Baldwin’s approval, which is already a feat in itself. – Rappler.com