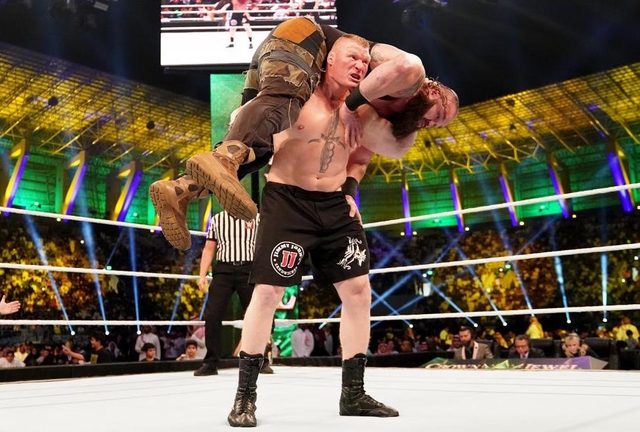 If you didn’t bother to go catch the show, there isn’t really a reason to get all caught up – unless, of course, you’re a hardcore Brock Lesnar fan, because the only impactful thing that happened on the contentious event is the Beast Incarnate becoming the new WWE Universal Champion. I guess, for whatever reason, it just isn’t Braun Strowman’s time yet.

Strowman’s loss was to set up a heroic redemption story in the future, though. Baron Corbin, the Constable of RAW, cost the Monster Among Men the match. That leaves Lesnar open to a wide range of challengers, but the first thing he has to do after winning the title is to deal with WWE Champion AJ Styles a week from now at Survivor Series. (More about that in a while.)

Other than the Universal Championship match, nothing big happened. The World Cup was won by an interfering Shane McMahon, making it mean less than it did going in. Triple H suffered an unfortunate injury in the main event, effectively derailing any future plans involving Shawn Michaels in the ring. AJ Styles is still the WWE Champion. The Bar are still the SmackDown Tag Team Champions.

An interesting theory goes that the WWE actually didn’t bother trying to save Crown Jewel from the controversial circumstances they found themselves in – they knew the core audience left watching the event was comprised of Saudis, the same people they got this deal for anyway. If Strowman (and by extension, Samoa Joe) would have won the title at Crown Jewel, his first ever world title win would always be marked with this terrible asterisk. If someone like Rey Mysterio won the World Cup, it would have been tainted as well.

Maybe it really was better off this way. Well, if you still chose to watch Crown Jewel, I’m not really judging you. The company will do whatever it wants to do, whether we protest or not, whether we boycott or not.

Anyway, here’s the other thing: Survivor Series is a week away. WWE and their creative team have been so myopic and consumed with trying to make both Evolution and Crown Jewel stand out on their own that they totally forgot to write substantial stories for Survivor Series. This is why the show defaulted to its Bragging Rights role, making it the second year in a row it’s become a proving ground as to which brand is better.

On one hand, it’s still not a bad idea on paper. It wasn’t last year, and in a vacuum, it isn’t terrible this year. Making it a RAW vs. SmackDown brand war sets it as a template that could be used to create easy drama every year.

On the other hand, however, the brand war has to be for something substantial for it to really mean something. I said this last year and I’m repeating it this year, because I still don’t see any stakes other than brand supremacy. What’s the point? Everyone knows SmackDown is still a better show than RAW anyway, so if they must divert attention away from that it’s got to be for some real marbles. Put the WrestleMania main event on the line or something.

And on the other other hand, they still had two weeks left to write and build a story to Survivor Series. That’s just negligent and inexcusable, because they could’ve built up both Survivor Series and Crown Jewel. Yes, it would’ve been a little confusing, but I don’t see why the Survivor Series stipulations couldn’t have been announced much earlier and slowly built up in the background while everyone focused on Evolution and Crown Jewel.

They could have at least already announced the champion versus champion matches for Survivor Series while promoting Crown Jewel and Evolution. That way, the title matches on both these gender-exclusive shows could have carried a little more weight because everyone already knew they would be affecting a future matchup.

Instead, these matches feel like the company merely stumbled into them and modeled the elimination matches after what the top champs already started.

It’s worth noting that at this point, only 205 Live has a match on the Survivor Series card that actually has a decent buildup. Mustafa Ali has been crawling his way to a shot at the Cruiserweight Championship for months now, while Buddy Murphy has been the dominant champion. They’re left in their own little bubble, so they have more control on how they tell their stories.

Anyway, the next week is crucial for the WWE in determining whether Survivor Series will be a must-see show, or just another should-pass Monday morning event.

Do you listen to podcasts? Would you want to listen to a local podcast about pro wrestling? If the answers to those questions – especially that last one – are yes, then you should check out the cleverly-named Smark Gilas-Pilipinas Podcast, featuring PWR General Manager Stan Sy, wrestling writer and Wrestling God Romeo Moran, and all-around multimedia person and former voice of PWR Raf Camus! On this week’s episode, Stan and Ro discuss Crown Jewel, Evolution, and NXT UK! Listen to it here or on Spotify! – Rappler.com