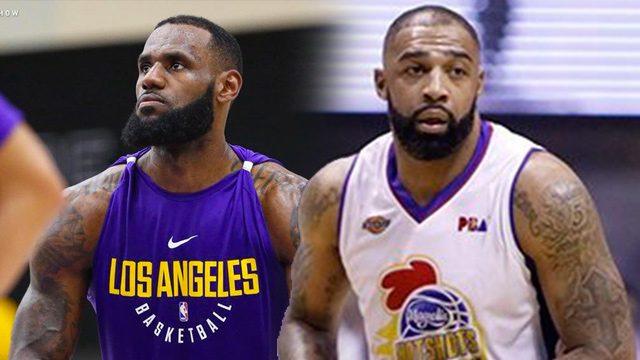 MANILA, Philippines – Romeo Travis pulled off a LeBron James as Magnolia moved towards the cusp of clinching a finals berth in the 2018 PBA Governors’ Cup.

The American import almost cost the Hotshots their 101-97 Game 2 semis win over Barangay Ginebra after missing two crucial freebies before making up for them with a clutch offensive board and a made foul shot.

Magnolia held a 100-97 lead in the final 20 seconds and needed at least a free throw to completely fend off the the Gin Kings. Travis, who was sent to the line, had two chances to make that happen.

But to Ginebra’s amusement, he missed both of them.

Fortunately for the Hotshots, Travis immediately corralled the offensive board and split his foul shots to make it a four-point game and eventually, seal the win for his side.

Interestingly, that sequence was close to what happened to close pal James, with whom he played high school basketball with at the famed St. Vincent-St. Mary, earlier on Monday, November 12.

Bron missed both FT's… but answered with a dunk  pic.twitter.com/8XbHjxmJxg

“I actually watched the game. I may have jinxed myself,” Travis told reporters with a smile.

A Magnolia loss would have knotted the best-of-five series at 1-1 and shifted the momentum to the Gin Kings, who now have their backs against the wall and will try to avoid getting swept.

“I missed 3 and luckily they came in pairs and I’m thankful to make the last one to seal the game. I’m just thankful for second chances,” Travis added.

“Everybody don’t get them so I’m thankful for the second opportunity to seal the game.”

Up 2-0 and with an opportunity to unceremoniously end Ginebra’s campaign for a third straight Governors’ Cup title, Travis and the Hotshots go for the kill in Game 3 on Wednesday, November 14, at the Araneta Coliseum.

“We’re going to try and close out the series the best way we know how and just keep playing Hotshots basketball, which is team. Team above all. Our new mantra is believe, and that’s what we’re trying to do – just believe.” – Rappler.com