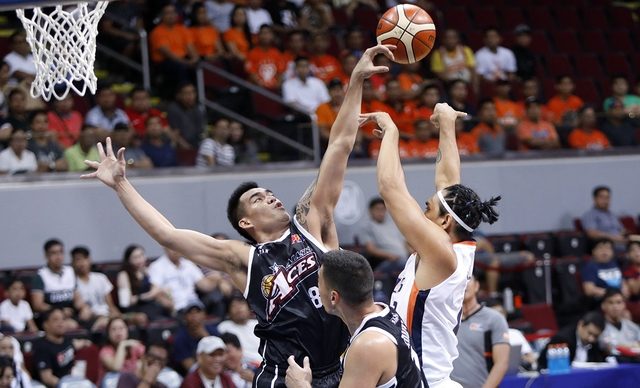 MANILA, Philippines – Alaska doused cold water on Meralco’s fiery run to even their best-of-five semifinals series in the 2018 PBA Governors’ Cup with a 100-95 win in Game 2 at the Mall of Asia Arena on Tuesday, November 13.

The Aces just had enough gas left in the tank to halt the Bolts’ blistering seven-game winning streak and avoid teetering on the brink of elimination by knotting the series score at 1-1.

Mike Harris delivered 37 points, 19 rebounds and 2 steals while Simon Enciso fired 23 points off 5 triples for Alaska, which almost squandered a 20-point lead but regained its bearings when it mattered most.

The Aces were comfortably ahead 66-46 in the 3rd quarter before the Bolts slowly trimmed their deficit to single digits behind import Allen Durham and Nico Salva.

Meralco continued to claw its way back in the 4th quarter and eventually narrowed the gap to just a whisker, 95-96, with 15 seconds left off a clutch Chris Newsome triple.

But the Bolts’ valiant stand ended there as Baser Amer missed a potential game-tying triple and JVee Casio and Enciso sank all of their 4 foul shots to secure the win for Alaska.

Chris Banchero flirted with a triple-double of 13 points, 11 rebounds and 8 assists while Vic Manuel and Noy Baclao chipped in 7 and 6 points, respectively, in the win.

Durham paced the Bolts, who lost for the first time in a month, with 24 points, 12 assists and 9 rebounds while Salva saw his personal-best tying 20 points go down the drain.

Amer finished with 14 points, Reynel Hugnatan had 12 while Mike Tolomia added 10 markers in the loss.