A round of golf with Kiefer Ravena 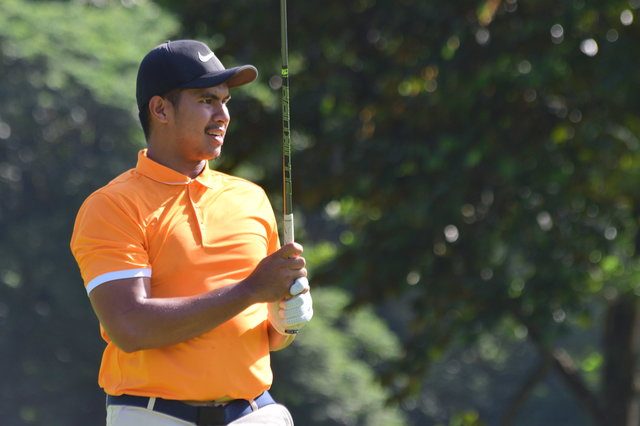 MANILA, Philippines – Kiefer Ravena and I became Valley Golf members on the same day. Our interview with the club’s membership committee was scheduled at 10 am last September, and while I showed up in a button-down long-sleeved shirt, Kiefer appeared in golf attire, and sweaty.

It was an indication of his newfound ardor for the game of golf. Kiefer had teed off that morning and had abandoned his round with 4 holes to go to make the interview.

I had known him a bit from my days covering UAAP hoops. We renewed acquaintances and spoke of playing soon.

Since we both got roped into the same “barkadahan” tournament team, Team Combat, our round happened a few weeks later. Wearing a bright orange shirt and Brooks Koepka’s golf shoe model, we met on the 10th tee of Valley’s South course and teed off for a round with 3 other teammates.

As another sign of his burgeoning golf addiction, Kiefer has bought a golf cart. A four-seater, second hand, fire-engine red number that was being driven by his regular caddie, Ato. I rode it down the 13th hole with him and asked him why he chose the game of golf.

“It’s the environment,” said the NLEX guard, pointing to the lush greenery surrounding us.

“Kahit araw-araw ko ito makikita, hindi ako magsasawa.” (Even if I saw this every day I wouldn’t get tired of it.)

Ravena’s buddy is Nico Evangelista, a pro golfer. He introduced Kiefer to the sport two years ago. When FIBA handed down its suspension to Ravena last May, he was already playing. Suddenly he found himself with more time for golf than he had expected.

And no, golf is not just nature-tripping with balls and sticks for him. Every course is an 18-hole battleground, and Ravena refuses to lose.

“I’m more competitive here than in basketball,” he confesses surprisingly.

“Hindi talaga ako nagpapatalo.” (I don’t allow myself to lose.)

Ravena then breathlessly relates a recent tournament he played in Marapara, in Bacolod, where he caught fire, shooting a 75. With his handicap of about 14, he won the tournament. He relates how he parred Marapara’s monstrous 618-yard 18th hole with a driver and two rescue clubs.

You can see Kiefer’s recent rounds on his profile at the website of the United National Handicapping System, or UNHS. Just look for Kiefer Isaac Ravena.

Those expecting a big, powerful swing from the Phenom will be disappointed. Ravena has a shoulder injury that prevents him from swinging fully without discomfort. (It doesn’t affect him in basketball.) Kiefer says his compact movement is like that of Tony Finau, the American Ryder Cupper. See it here;

Kiefer’s best part of his game is his putting, and on the 8th hole of our round, Valley South’s par-5 17th he drains a putt of about 25 feet for a birdie. Instead of celebrating though, he reacts with grimace.

Apparently just before he stroked the putt he promised Ato P3,000 if he sunk it. Bye-bye 3K.

By the time we reached our 10th hole, Valley South’s hole number one, a quick check of the scorecard reveals that I’m merely a stroke adrift. I’m feeling lucky, so I make him an offer.

“You wanna play for drinks? Even?” I ask.

And then I see it. The glint in his eye. That maniacal competitive fire that drove Kiefer to all those UAAP titles with Ateneo and then to the NBA D-League.

“Sure,” says the baller. There is a shake of hands, and we are on our way.

I will spare you any suspense. Kiefer’s putting continues to be his strong suit, as he holes putt after putt. But his ball-striking is off. Some shots are blocks to the right, others hooks to the left. I play my game and end up winning.

He definitely tried though. At the par-5 5th he triple-bogeys and asks me if I get bogey. When I answer “yes,” he mutters “damn” under his breath, ruing the two strokes he loses on the hole.

There is plenty of time for more chatting about golf.

“Has this been one of the ways you have coped with the disappointment of your suspension,” I ask.

“Well, that’s aside from the support of friends and family, I presume.”

“But that’s a given, that they will be there for me,” continues Ravena.

Ravena lives in a subdivision along Marcos Highway, and he makes the quick trip to Valley up to 5 times a week to get his fix. He is so golf-addled that he is seriously considering building a house nearby.

“Does Alyssa, (Valdez, his partner), think you play too much golf,” I ask.

“A lot of the time,” Ravena admits with a smile. But Valdez has also taken a liking to sport and has even scored a hole-in-one. Ravena is still waiting for his first ace.

Ravena mentions he and the volleyball sensation are slated to play a round soon in Malarayat, in Lipa, Batangas, where Valdez is from.

The game of golf has also become a vehicle for Ravena to share with the less fortunate. Last October 24 he hosted a charity golf tournament to raise funds for Letran player Jerrick Balanza, who is stricken with a brain tumor, and the family of the legendary hoops barker Rolly Manlapaz, who died of Lou Gehrig’s disease recently.

Ravena was a frequent visitor of Manlapaz while he was bedridden. The tournament was able to raise about P100,000 for each of the beneficiaries. Kiefer was hands-on for his event, showing up before dawn to organize and coordinate.

Ravena hopes that FIBA shortens his ban, which is 18 months long. NLEX has been very supportive and he trains on his own.

“I tell the coaching staff that once I get back on that court I’m going to take, like 50 shots,” says Ravena.

But for now the only shots he takes are with his clubs, playing the game he describes as “the most relaxing sport, and also the most frustrating.”

Two weeks after we play, Ravena fires an 87 in Manila Southwoods’ Legends course, a healthy 9-stroke improvement over his round with me. His handicap is down to 13. Kiefer obviously worked out the kinks in his swing.

Whether it’s hoops, golf, or the game of life, this Phenom is never down for long.