#16Strong: UP fans loud and proud on Twitter after historic UAAP win 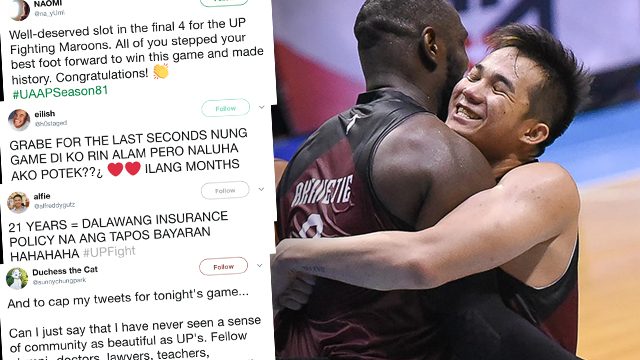 MANILA, Philippines – Nowhere to go but up! The longest active Final Four drought in the UAAP is finally broken.

After 21 dreadful years, the University of the Philippines (UP) Fighting Maroons secured a spot in the highly coveted Final Four of the 81st season of the UAAP men’s basketball tournament.

With an all-important win over the De La Salle University (DLSU) Green Archers, 97-81, UP finished with an 8-6 record in the eliminations, good enough for a 3rd place finish in the standings.

The UP Fighting Maroons are BACK IN THE UAAP FINAL FOUR for the FIRST TIME SINCE 1997! Congratulations! #UAAPSeason81 https://t.co/Xhl8xHe5NM pic.twitter.com/Nyz6QMELA5

WE DID IT! The @upmbt is now in the Final Four! Let’s continue supporting them in the UAAP Season 81 Men’s Basketball Tournament. #UPFight #ItAllBeginsHere pic.twitter.com/7ZenokGCXr

UNIVERSITY OF THE PHILIPPINES CRASHES INTO THE FINAL FOUR AFTER 21 YEARS. #UAAPSeason81 pic.twitter.com/jIFG81npil

Shortly after the historic win, UP fans took to Twitter to express their support. Keywords related to the game dominated the Twitter trending topics in the Philippines. UP is in the Final Four

UP will face the Adamson Soaring Falcons in the semifinals, while the top-seeded Ateneo Blue Eagles will go up against DLSU or the FEU Tamaraws.

How do you feel about UP’s win today? Let us know in the comments! – Rappler.com