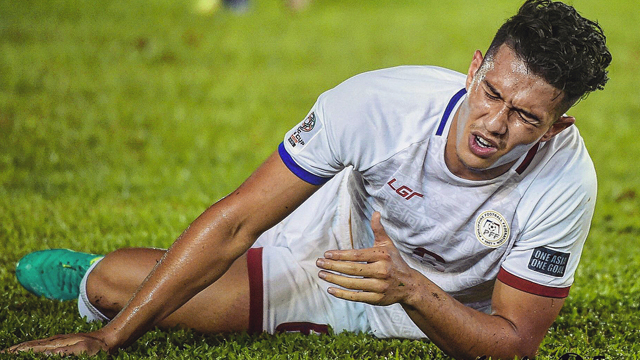 MANILA, Philippines – The Philippine Azkals are down to 22 men as Luke Woodland is out for the rest of the Philippines’ campaign in the 2018 ASEAN Football Federation Suzuki Cup due to a foot injury.

The Buriram United defender will be sidelined for a month.

Woodland, 23, sustained the injury from a hard tackle by Shakir Hamzah, who got booked for a yellow in the 30th minute during the Azkals’ opening win versus Singapore.

After the incident, the starting centerback remained down on the pitch and was immediately rushed to the emergency room.

In the 34th minute, Daisuke Sato came to fill in the defense and took Martin Steuble’s starting left back position while the Ceres player moved to pair up with Paul Mulders in the centerback position.

The Azkals managed to score a historic 1-0 victory over a physical Singapore team to open their campaign, but they now have to go through the rest of the biennial competition one man short.