Alaska boots out Meralco for first finals in two years 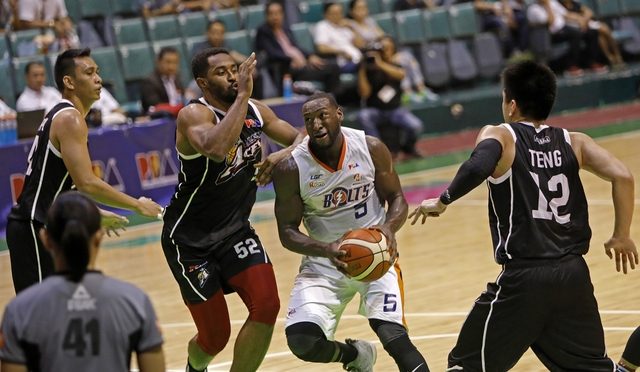 Facebook Twitter Copy URL
Copied
The Aces set up a finals date with Magnolia, which ended Barangay Ginebra's reign in the Governors' Cup

MANILA, Philippines – For the first time in two years, Alaska is playing in a PBA finals.

The Aces puffed enough gas to hack out a 99-92 win over Meralco and wrap up their best-of-five semifinals series in the 2018 PBA Governors’ Cup in 4 games at the Cuneta Astrodome on Saturday, November 17.

Import Mike Harris churned out 27 points, 14 rebounds and 3 steals and knocked down timely in the crucial 4th quarter as Alaska reached the championship round for the first time since the 2016 Commissioner’s Cup.

Alaska set up a finals date with the Magnolia, which ended Barangay Ginebra’s reign in season-ending conference in 4 games of their respective semifinals duel.

It was a nip-and-tuck battle midway through the final frame frame with the score knotted at 73-all until the Aces erected an 11-2 spurt – sparked and capped by Harris triples – to gain an 84-75 lead.

The Bolts shaved their deficit to 3 points, 87-90, with 1:30 minutes left behind an Allen Durham bucket only to witness Alaska put the game away using a win-clinching 12-2 run.

JVee Casio chalked up 14 points, Jeron Teng pumped in 10 points and 8 boards and Vic Manuel and Kevin Racal added 10 markers apiece in the win that saw the Aces erase a 14-point deficit in the first half.

Meralco was primed to force a do-or-die Game 5 after leading 28-14 in the maiden period until the Aces regained their bearings to narrow the gap to just a whisker heading into the second half, 47-48.

With the momentum on its side, Alaska extended its lead to 8 points, 68-60, entering the 4th quarter.

Durham saw his 31-point, 14-rebound outing go for naught as he falls short of his bid to carry the Bolts to their third straight Governors’ Cup finals.

Reynel Hugnatan had 13 points, Chris Newsome finished with 12 points, 9 rebounds and 7 assists while Baser Amer and Nico Salva added 10 points each in the losing effort.

Alaska and Magnolia lock horns in Game 1 of the best-of-seven finals series on December 5.