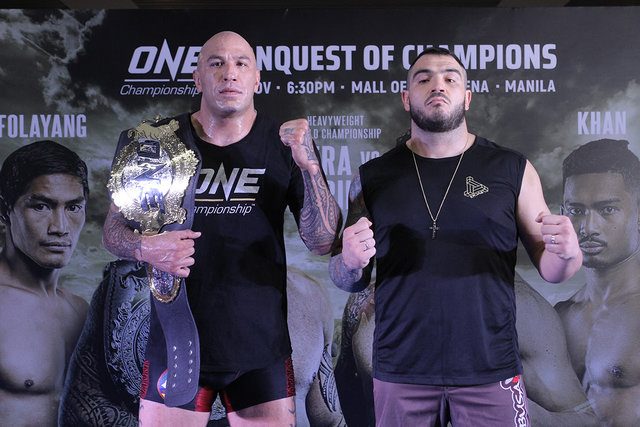 MANILA, Philippines – After a two-year layoff, reigning ONE heavyweight world champion Brandon Vera is set to return and defend his title at ONE: Conquest of Champions at the Mall of Asia Arena on Friday, November 23.

Before their star-studded showdowns, all 4 fighters gave fans and media a taste of what’s to come in an open workout at the Victoria Sports Tower in Kamuning last Friday, November 16.

After a 2-year layoff, Brandon Vera is set to defend his ONE Heavyweight World Title against Italian challenger Mauro Cerilli! @RapplerSports pic.twitter.com/vhQQPW99Mo

Eduard Folayang looks ready to down Amir Khan and become a two-time ONE Lightweight World Champion at Conquest of Champions on November 23 at the MOA Arena! @RapplerSports pic.twitter.com/GfZFV4QSv4

Despite his long break, Vera thinks he’s in even better shape.

“I’ve been away for a while, almost two years, but don’t think for a second that I haven’t been training and keeping sharp,” said Vera, “I’m stronger, faster, smarter, and better now than ever before.”

“My team has made sure that I will be at my best by the time I step back into the ONE cage. This is home for me,” he continued. “I really missed this and I am excited to perform in front of you all next Friday night. The belt is going to stay in the Philippines.”

However, Cerilli clearly has other plans.

“Brandon is a great champion, but he’s lost his edge,” he declared. “I am here to claim the ONE heavyweight world championship.”

Like Vera, Folayang has a lot to prove in his bid to become a two-time lightweight champ.

“I want to prove to the world that I am not done yet in this sport, and that I can still be world champion,” he said. “Losing the title for the first time, it was a very painful feeling. But in defeat, I have discovered my weaknesses and made efforts to improve certain parts of my game. Now I am ready to showcase my championship form once again.”

But like Cerilli, Khan is confident that homecourt advantage for his Filipino foe won’t matter once they’re inside the cage.

“I have 13 bouts in ONE Championship and 11 of those are wins,” he said. “I’ve won my last two in exciting fashion. It’s only right that I am now challenging for the world title.”

Come Conquest of Champions, all 4 fighters are set to prove something for themselves and their fans. From the looks of the workout, they’re ready to prove their worth as early as now. – Rappler.com